At this rate, and given the Hagrid fiasco, I bet they announce this thing after about 100 successful test runs.

I seriously doubt we get any info on Velocicoaster before Bourne opens, but who knows.
Reactions: RFRees

This is my number 1 most anticipated ride in Orlando right now
Reactions: MartyMcFly

Im really liking what I'm seeing so far with the Paddock/Watch Tower kind of look. Add a load of electric fences around the perimeter and get that foliage back in and this could be what most people wanted the area to look like all along.

I'd expect some announcement and concept art before the summer season starts purely out of necessity. Once track installation begins, it will be too noticeable to hide and the last thing that Universal wants is misinformation and every team member getting bombarded with questions when trying to do their job.

It also makes a great advert for people to return next year.

Logic and Universal's marketing don't go hand in hand however.

The new lockers at FJ aren’t close to being completed yet.

Land isn’t even graded and only a tiny tiller (like you’d use in your personal yard) and a small bobcat are on site.

I’d say at least 2 months away.

How long is the PL park announcements panel? My thing is i feel they’d announce all attractions there for this and next year because if not all they could announce is snw in japan specifics + opening day and bourne , which is barely time for a panel of announcements (not to mention snw usj is already has most of its aspects announced and will get more at the nintendo event february). Adding 2021 adds this ride, SNW hollywood specifics, universal beijing details etc. to the mix (which to me seems more likely depending on how long the panel was announced to be)

Andysol said:
The new lockers at FJ aren’t close to being completed yet.

Land isn’t even graded and only a tiny tiller (like you’d use in your personal yard) and a small bobcat are on site.

I’d say at least 2 months away.
Click to expand...

Locker Team Members told me it will be ready in May... at the earliest.
Reactions: Journey_On and CyborgDinosaur

If there's rockwork involved in the new locker project (and there supposedly is, right?), then I can't see it being a quick build, unfortunately.
Reactions: Coolbfitz

Well, the to be locker situation will be a joy for a long time so I'm sure it's worth the wait. 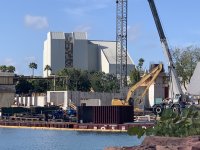 It looks like track will be laid in the tunnel for the second launch pretty soon!
Reactions: RFRees

So, initial launch and spaghetti bowl is likely “inside” the paddock. The second launch is breaking out of the paddock.

Legacy said:
So, initial launch and spaghetti bowl is likely “inside” the paddock. The second launch is breaking out of the paddock.

Ya, this does sound dope if true. My whole thing with this coaster for awhile has been I need to see before I fall in love but the more I hear/see I am impressed by. If this is the case than I'm even more excited. Awesome stuff ahead.
Reactions: RFRees

This is becoming the dark horse of Orlando theme park coming attractions. This is looking a bit more complex than I thought it would be. I'm betting that the theming will be spectacular.
Reactions: SukaVayne73, Jones14, Dhdhddh and 5 others

Good video from @RollermanDan. Notice the cutout in the second launch tunnel. Maybe for an effect/scene?
Reactions: OrlLover, alias8703, badlactose and 3 others

Is that "tower" an elevator shaft for the load station?

Id be FLOORED if there's not track up by the end of next month. Which then doesn't hide its a rollercoaster to the guests, which ALSO coincides with Peacock live. Announcement then maybe???

I know where the exit is guys, ill lead myself out.