Do you guys expect another celebration for the Lunar New Year in the next month or two?

William said:
Do you guys expect another celebration for the Lunar New Year in the next month or two?

I personally thought last year's decor in Universal Plaza was a nice addition. Also, who could forget Mandarin Megatron?
Click to expand...

IDK if I expect it, but I would love to see some decor and Mandarin Megatron!

It's official, folks! Universal Studios Hollywood is celebrating the Lunar New Year for the second time, this year being the Year of the Ram. Some of this year's festivities are returning from 2014, such as a scarlet-colored Universal Plaza, Mandarin Megatron, and dressed characters like Woody & Winnie Woodpecker (this year, Curious George will be joining). Perhaps the most exciting addition will be the Universal Studios arch being adorned with plum blossoms for the first time. The event will run from February 13 until the end of the month. Full details here:

I think its somewhat safe to say this'll be an annual thing.

I, personally, hope so. I loved the decor for Universal Plaza last year, and they really went all out by including the park characters in the festivities. A decorated entrance arch is really the cherry on top!
Last edited by a moderator: Feb 5, 2015
Reactions: Allen The Actor, Aaron and BernardMesa

Universal Plaza is now fully decorated for the event. This year's decor is without a doubt more extravagant than the last, with new additions like plum blossom trees, even more lanterns, and a new oriental backdrop which will likely be used for Mandarin Megatron during his meet-and-greets. Most notably, a rounded 4-post arch, dubbed the Plum Blossom Arch, is now up in the center of the plaza (this contradicts my earlier assumption that the Plum Blossom Arch referred to the main entrance arch adorned in plum blossoms). They've also brought back the lamppost banners featuring every sign of the zodiac, and traits to go with it accordingly.
Reactions: BernardMesa

Time for me to post possibly the only review of this small seasonal event, as I ,and evidently the only one, am obsessing over it more than needed.

I think the Lunar New Year Celebration was nicely composed. The event has been vastly improved from last year's, which was pretty lackluster. This year there were a few notable additions, including (but not limited to) the plum blossom arch, an additional meet-and-greet spot, themed food/drinks, small plum blossom trees with wish-making stations, and even atmospheric Chinese music replacing the usual old age Hollywood tracks that normally flood Universal Plaza. My only wish for the event, if it were to return next year, would be the inclusion of some sort of performance in the center of the plaza that incorporates large puppets, kites, and a traditional dragon dance.

I spent quite a lot of time enjoying the aforementioned additions, and took some photos for those who didn't get to see the event: 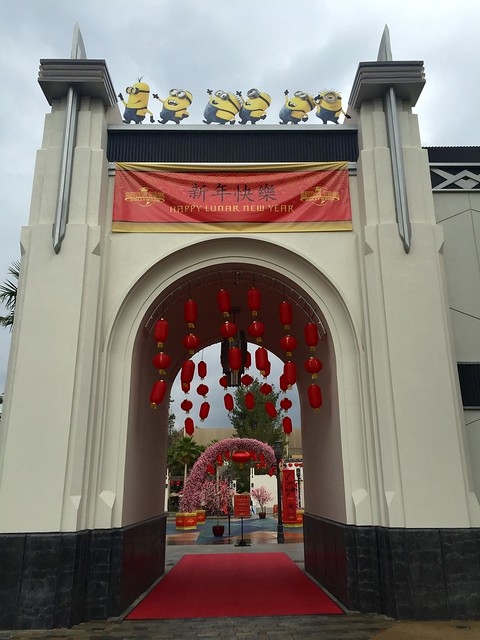 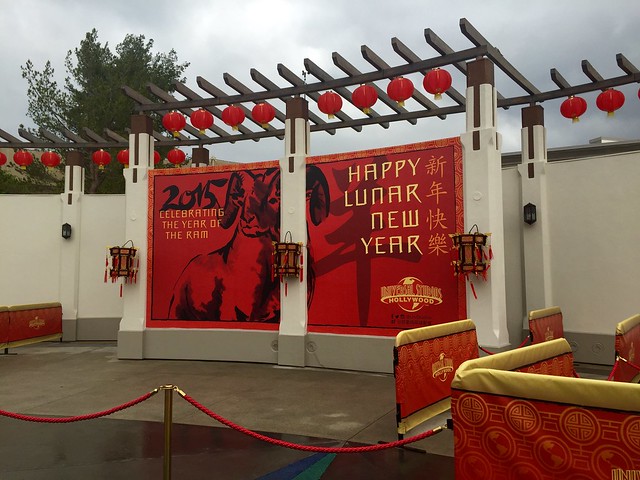 Celebrating the Year of the Ram. 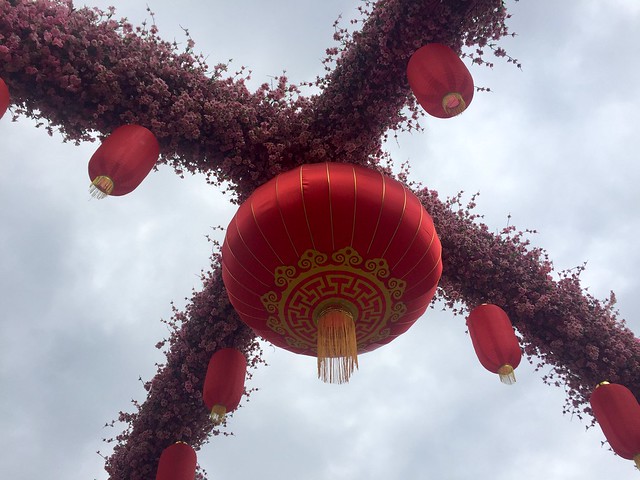 A close-up of the plum blossom arch. 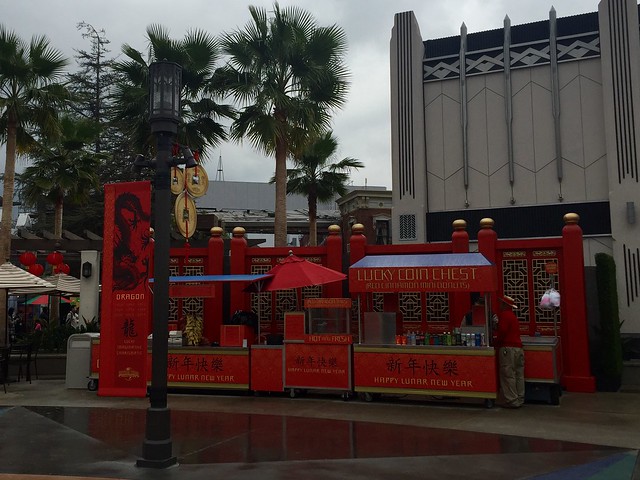 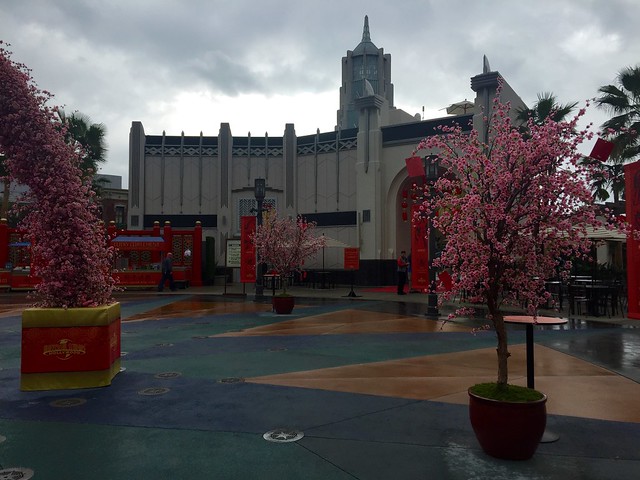 A reverse view of Universal Plaza. On the top right of the main structure, you can see an umbrella covering the hideout for Megatron's voice actor as he watches the meet-and-greet. 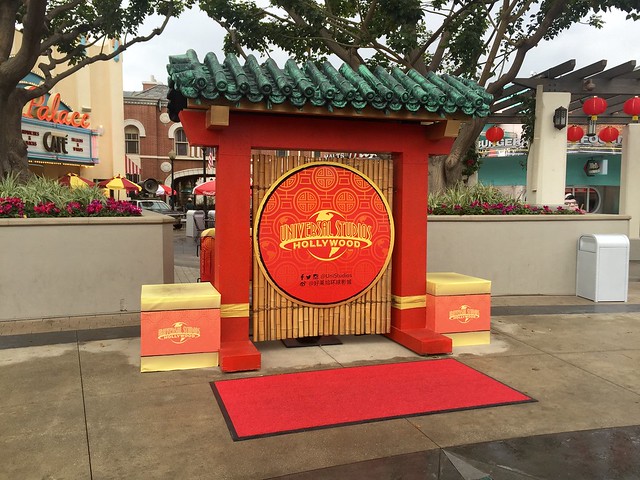 The meet-and-greet spot for Woody Woodpecker, Winnie Woodpecker, and Curious George (all in their traditional Chinese dress). 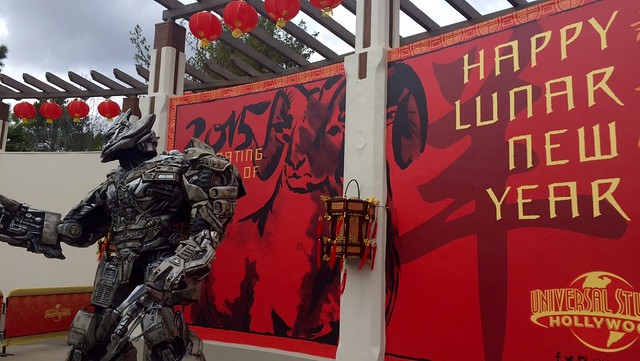 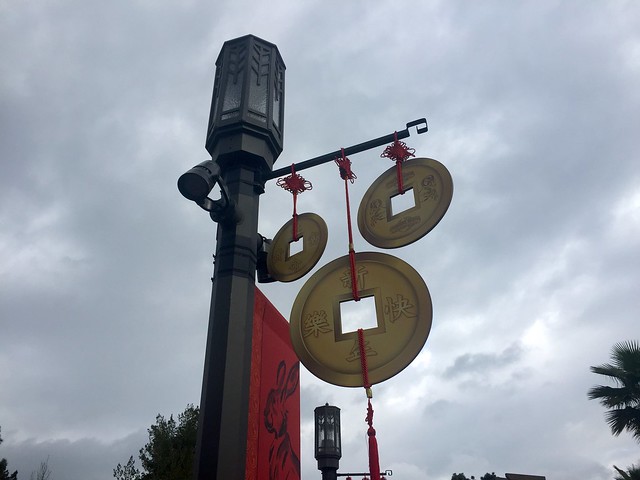 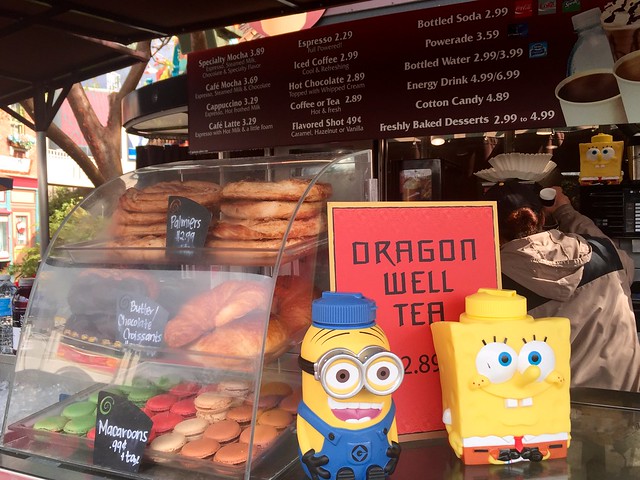 Dragon Well Tea, being sold at the Brews Brothers cart across from Universal Plaza. 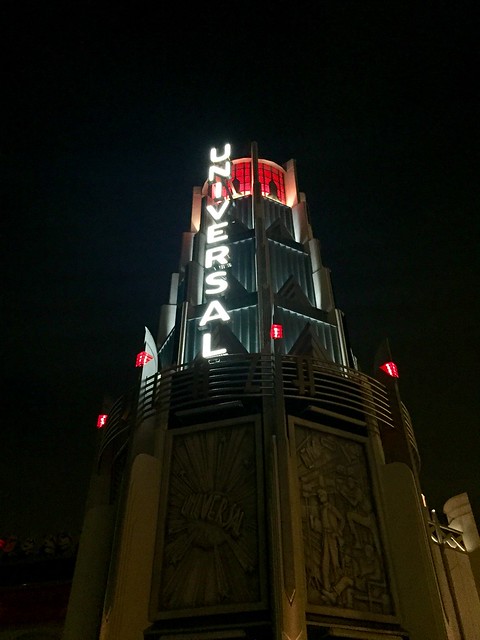 I hope those treats will still be there when I go to the park Saturday.

Not going to deny that I purchased and thoroughly enjoyed every single mini donut in that box, though. I wish I had tried the iced green tea. Didn't think to ask what the Dragon Well Tea was.