Well, I'm finally back after an unplanned 3-week hiatus from posting, and I brought goodies.

On December 22nd, I got to take part in the wonderful VIP Experience to celebrate my birthday. I took countless photos that day to commemorate the experience, but I've tried to narrow it down to a select bunch that I thought would be good to post here. It's still quite a lot of pictures, so prepare for a lengthy post. 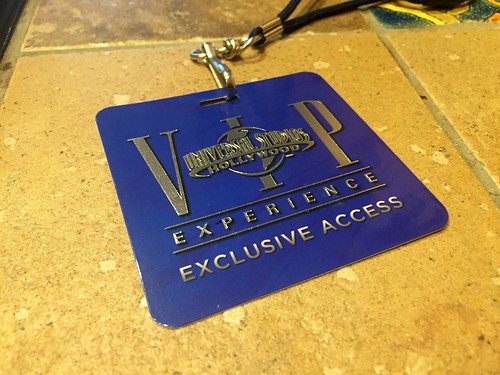 Let me start off at about 8:30 AM that overcast, drizzly morning. My group had scheduled a 10:30 AM tour for that day, but we arrived much earlier than we had anticipated. Lucky for us, the super helpful receptionists at the front desk of the VIP lobby were able to reschedule us for a 9:30 AM tour so we could enjoy the lounge offerings for about an hour before taking off. 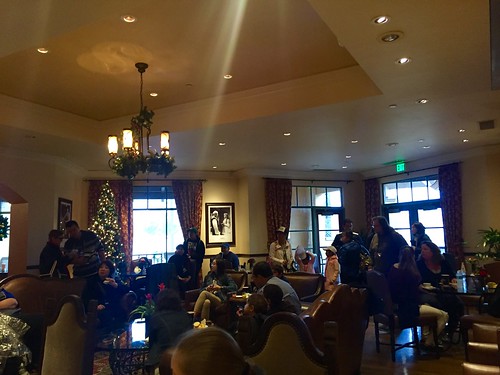 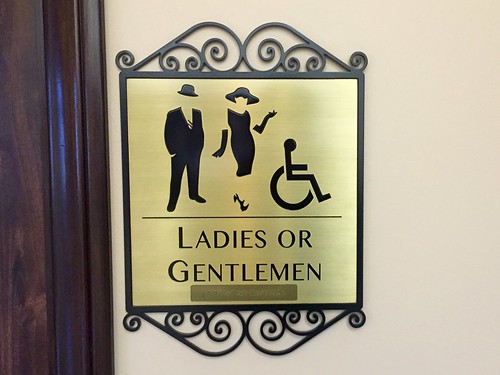 I had been in the VIP Lounge once briefly when taking a HHN survey, but it was nothing like the way I had experienced it this morning. It was pretty packed with VIP guests, but it was a beautiful setup. Complimentary breakfast sandwiches, pastries, and other foods were spread out among numerous tables in the hallway to the left of this picture for all guests to enjoy and Dr. Seuss' How The Grinch Stole Christmas was playing on the large monitor in the lounge filled with plenty of comfy chairs and couches. 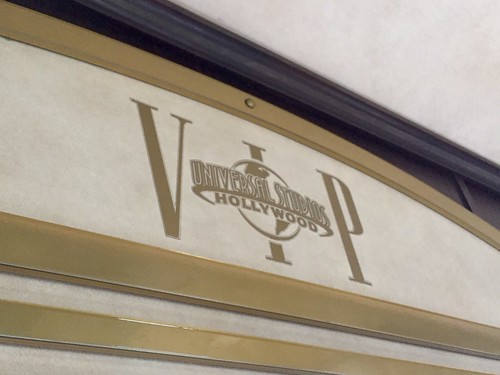 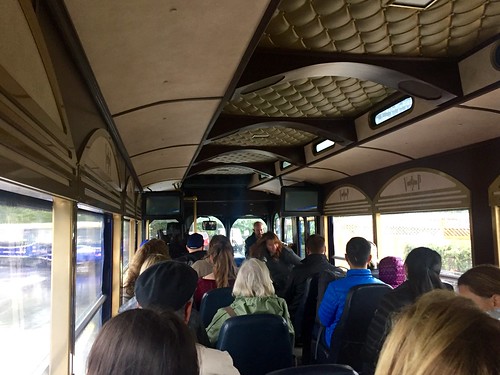 Approximately 30 minutes before our tour was scheduled to begin, our assigned tour guide Hershey made her way around the lounge introducing herself to those she was giving a tour to that day. She made sure to sit down with each group to learn everyone's names, give a brief overview of the plans for the day, and to ask if anyone had any specific requests for our tour. Once our tour group was all standing in the lobby and ready to leave, we were each given a little VIP amenity pouch filled with things like sunscreen, aspirin, and a couple of other conveniences. Our group was paired with another tour group that day and we all headed down the stairs of the VIP lounge, across the ticket booth plaza, and onto our VIP trolley which was waiting for us in the parking lot just behind the globe statue (and with comfortable cushy seats and complimentary icy water bottles calling our names).

Our first stop on the tour was Soundstage 3. 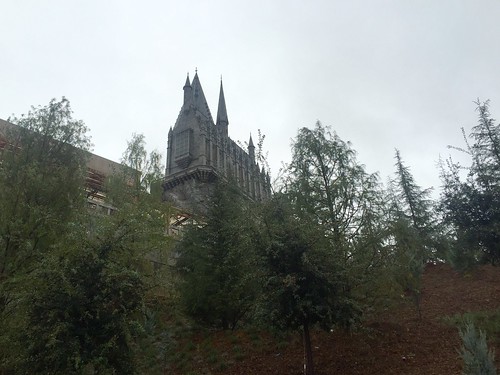 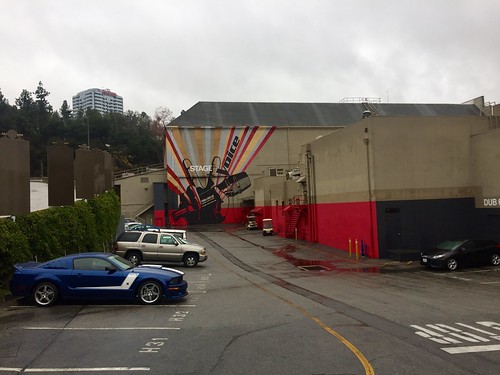 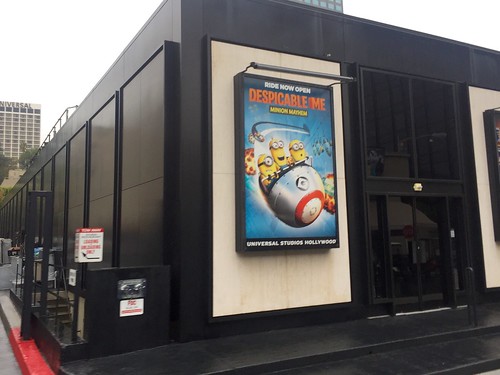 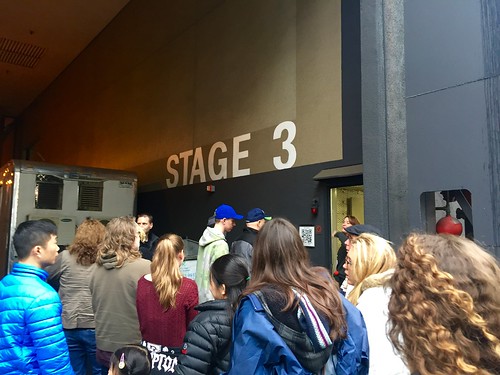 After making our way around the parking structures, past the back of Hogwarts Castle, and through the Backlot, we got to make brief stops by Stage 12 (which houses The Voice) and some of the offices for the movie studios. We eventually reached the side of the soundstage and all hopped out of the trolley. As our tour guide ushered us into the building, she explained to us how we were about to walk on the set of an upcoming medical drama television show called Heartbeat. 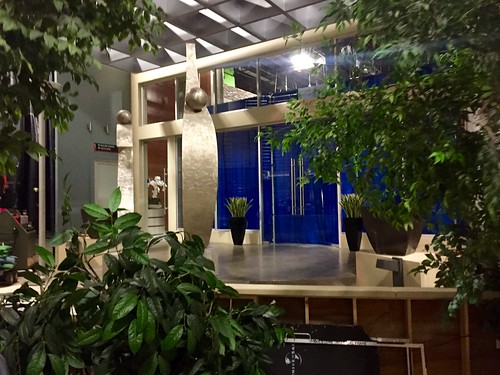 While observing the exterior portions of the hospital set, we were given the basics of what it's like to work in a soundstage. Behind us were several large lighting rigs which simulate daylight for the exterior scenes that are shot here. 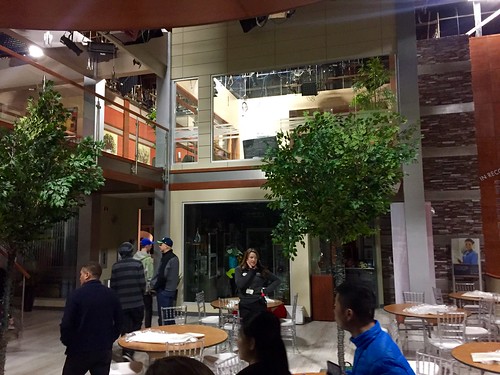 We then were guided into the main lobby of the "hospital," which was actually a 2-story set complete with offices, a cafeteria, and a gift shop. 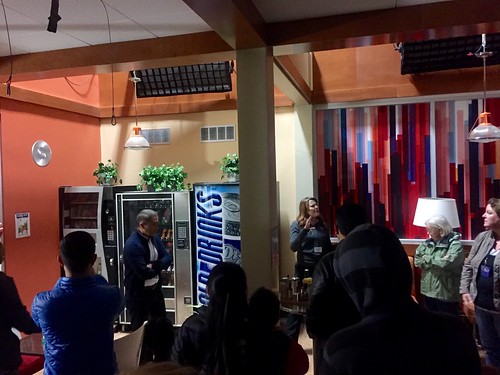 Here, our tour guide Hershey briefly explains the process of situating lights around a set, in addition to explaining the use of product placement on the labels of food and drink props.

Next up on the tour was probably one of the most exciting stops, and that was Courthouse Square. 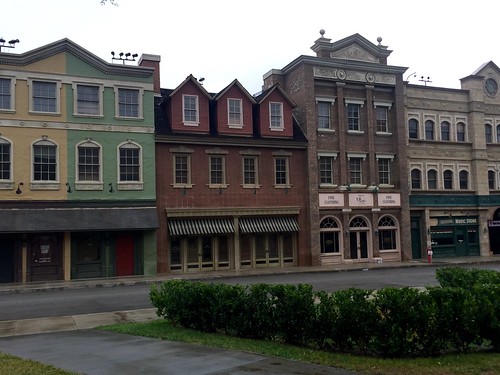 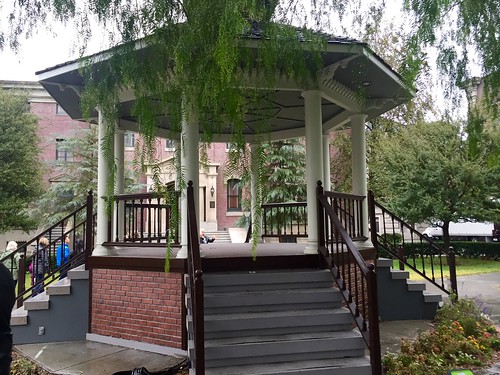 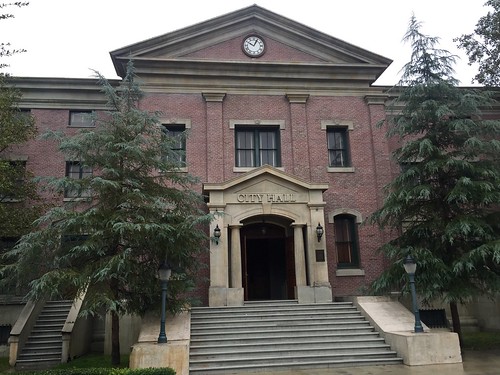 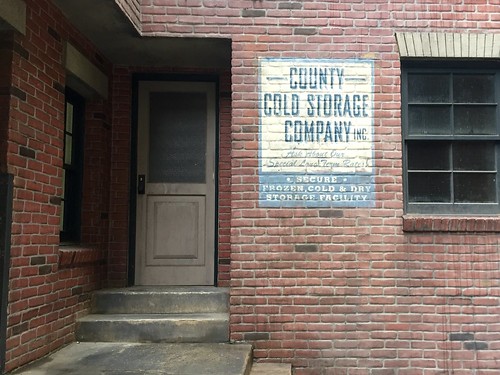 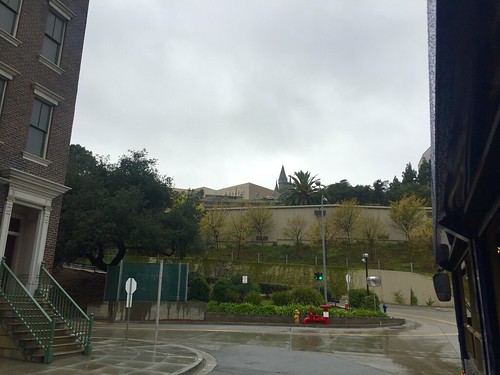 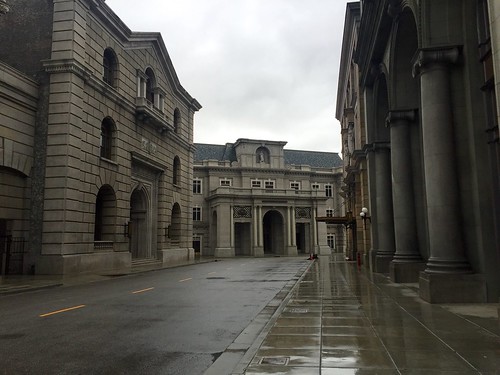 After taking photos in front of the clocktower, our guides walked us throughout some of the Metro Sets that we're so used to seeing on the regular Studio Tour. 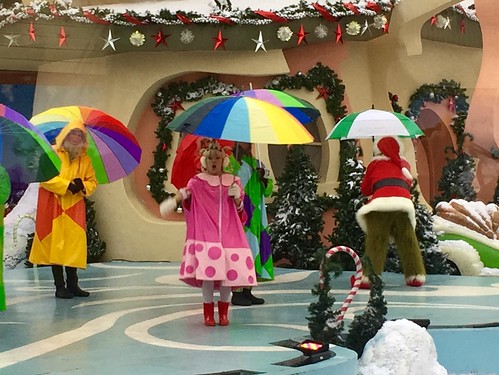 Once we finished touring the Metro Sets, we made our way back onto the trolley and experienced the regular animations of the tour. Unfortunately the Whos weren't able to put on as extravagant of a show for us due to the rain, but The Grinch still made sure to show us his best side (literally). 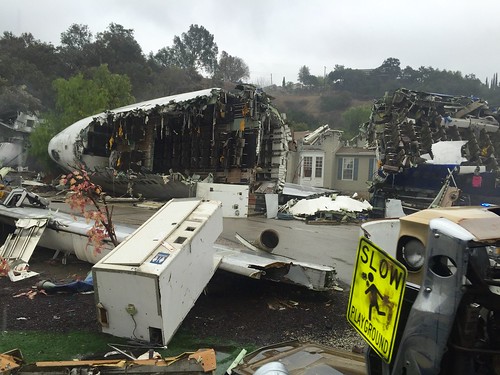 The War of the Worlds set looked especially eerie on this occasion due to the severely overcast skies. 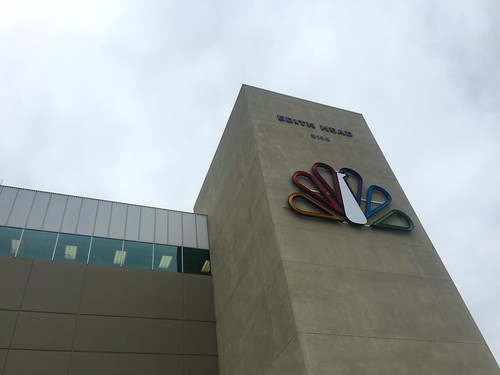 After going through some of the regular motions of the tour, our trolley made its second to last stop in front of the infamous Prop Department. 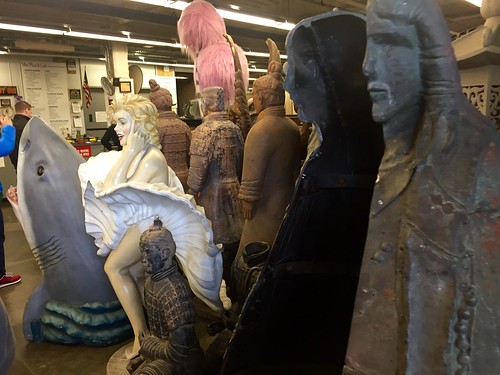 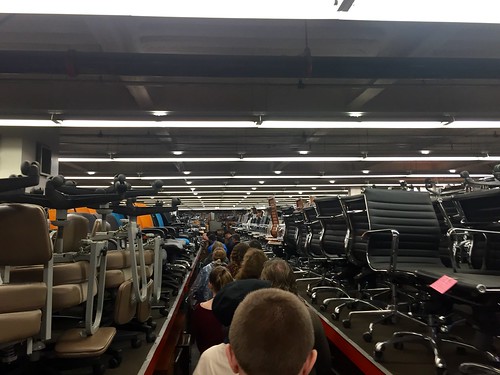 Our tour guides took us around the loading docks of the building and inside to see aisles upon aisles of props and furniture. They explained to us the process of renting out props for different shows and films, and pointed out a few that we may recognize from some of Universal's more famous films. 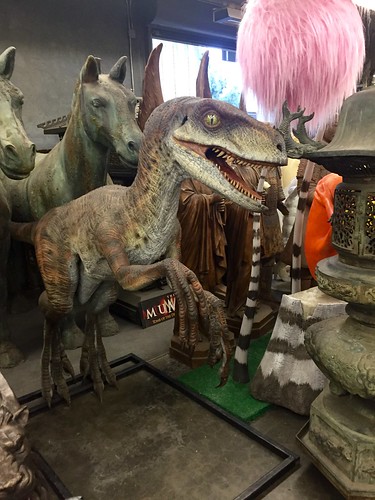 Here's a model of a Velociraptor used during the making of Jurassic Park. While the statue itself isn't seen in the film, it was used to create shadows and to give the actors reference while shooting (for example, in the kitchen scene where Lex and Tim are hiding from the raptors). 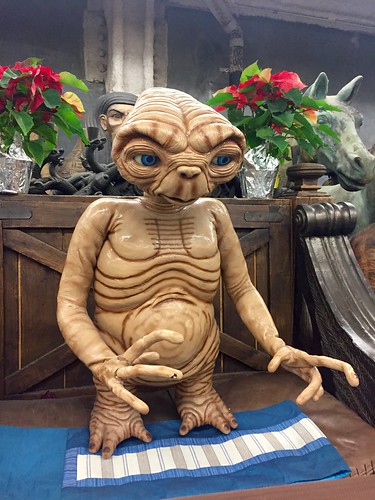 This is an old audio-animatronic from E.T. Adventure, sitting upon a throne seen in Gladiator.

After we finished our tour of the Prop Department, our trolley took us to the Lower Lot to hit the rides down there before making our way up the StarWay and onto the Upper Lot. Once we made our trek back up, we did The Simpsons Ride and Minion Mayhem. Our guide Hershey then dropped us off at the VIP dining room located on French Street beside Super Silly Fun Land. This was arguably one of the best parts of my day. 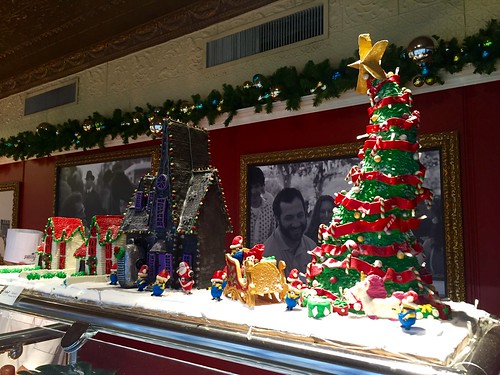 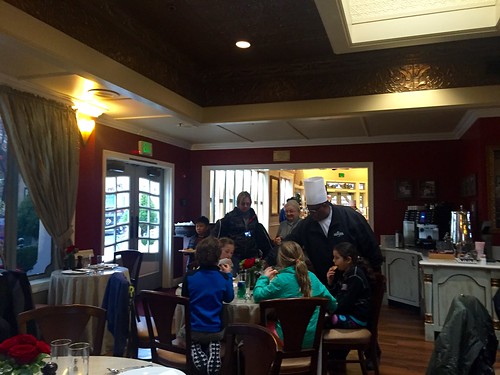 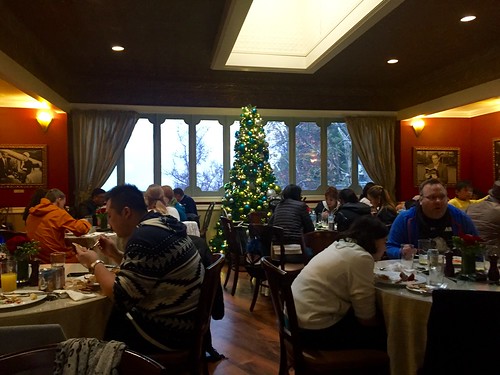 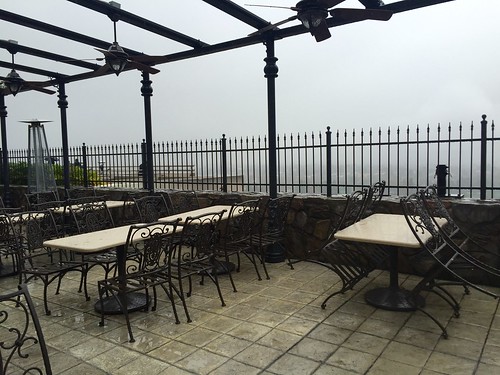 Hershey had told us at the beginning of the day to try and skip on snacks around the park so that our stomachs were empty for lunch, and now we knew why. As we walked into the dining room, an almost endless buffet counter on our left was packed with more food options than I could count. From salads and pastas, from sushi to soups, from filet mignon to turkey, and from cheesecakes to crêpes, they really had it all. This was, without a doubt, the best meal I had ever had in the park.

The chefs and other team members inside the venue made sure to check in with guests on a regular basis to check that everyone was enjoying their food, and everyone was so kind and gracious.

After lunch, Hershey met up with us once more to take us to WaterWorld. She guided us to the outside of the show venue and we all said our thank yous and farewells to one of the best guides we could've been given that day. Once she sat us all down in our designated seating inside the venue, we all waved goodbye to her and enjoyed the show. 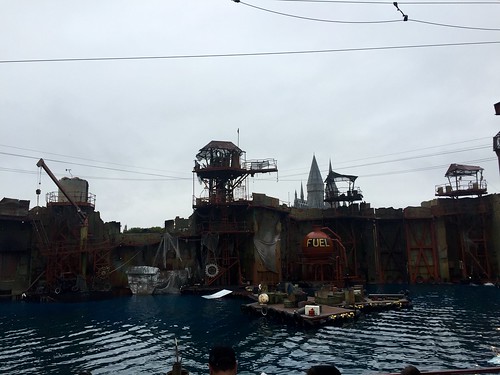 Looking back, I don't have a single regret. This was, without a doubt, my most enjoyable trip to the park out of all my times visiting (for obvious reasons). If any of you are considering the VIP Experience, I strongly advise that you look into it. You won't regret it. Also, if you do end up buying tickets, try to ask for a tour guide named Hershey!
Reactions: Lissa, Opie, Allen The Actor and 4 others

Glad to hear that Hershey is a regular Studio Tour guide as well, she's super knowledgeable and kind.

And thanks!
Reactions: Aaron and Stylowtrix

Great spread.  I hope to do the VIP tour someday!
Reactions: William and BernardMesa

Stylowtrix said:
Welcome back William!  Glad to hear you had such an awesome time with the VIP Tour! I've never done it myself but have only heard amazing things similar to what you've said. Thanks for sharing all those pictures, that's too cool how you get to go into soundstages and see legit sets that we'll all be seeing on TV soon.  Also, I've always wondered just how great that VIP restaurant on French Street is and from how you've described it... I'm hungry just thinking about it!  If only the park could have a sit down restaurant with that quality of service and food open to the general public.

One more thing, I freaked out the first time you mentioned Hershey because I've had her as a tour guide on the regular tram tour before and she is by far the best guide me or my girlfriend has ever had!  After the tour was over, we both talked to her for about 10 minutes and she was so down to earth and just an awesome overall person. It makes the studio tour so much better when you have a guide as passionate as she is. I could only imagine how great she was with the VIP tour!

By the way, happy belated birthday!!
Click to expand...

Extremely amazing description of the VIP Tour! I always wondered what its like and thats amazing. So its not just a tour but they basically take you around the behind the scenes as well as the regular park too...thats incredible.

Also...that pic of the Raptor prop is pretty incredible although I may be biased due to JP being my favorite movie.
Last edited by a moderator: Jan 13, 2016
Reactions: William and Stylowtrix

Yep. I'm definitely doing the VIP tour for my bday... even if it happens to fall on opening weekend of Potter :wacko:

My only regret & disappointment in regards to the VIP tour is not coming out to Cali sooner so that I could have gone inside SS28. That was really my main reason for wanting to do it. At least Little Europe should be ready by April!

It sounds like Moulin Rouge will be a great place to eat. If they didn't need it for the VIP tours, it'd certainly make a great table-service/buffet restaurant for the park.

Hands down the BEST trip report on the site! I felt like I was right there with you while reading it and I had major chills. Wonderful pictures as well (as usual

) The VIP Experience looks incredible and still on my bucket list, and I'm so thrilled you of all people got to do it on your birthday! You deserve it bud, glad you had a blast!
Reactions: William and Stylowtrix
D

Hi, I will be back in the US and visit the studios at the beginning of September. This time I am planning to do the VIP experience. I would like to step out the tram to see the Courthouse Square and the Wisteria Lane.


I learned that this may only be possible if there is no filming occuring that day on those locations.


What would you say: Does it help to book the tour on a Saturday / Sunday? I thought there might be a better chance to see those locations due to less filming going on in the studios?