Last year Thorpe park in the UK launched the countries first ever Wing rider, themed around an apocalypse complete with a plane wreck and a crashed helicopter. This B&M beauty opened with great reviews although some commented on it having a short ride time and others claiming it to be slow.
Personally I love the ride, it has silky smooth transitions, fantastic themeing and the feeling of openness feels like nothing i have riden before.

With the 2013 season fast approaching Thorpe has revealed The Swarm will have "a twist in it's tail" , what is this twist? I hear you gasp, well in surprise move The Swarms back 2 rows will be reversed giving you the option to ride forwards or backwards.

I had heard Thorpe had something up there sleeve for next season, I never would have guessed at this. Should be interesting to say the least.

I can't wait to be dragged backwards up the 127ft lift hill but what do you think, is it a gimmick, will it improve the ride and has this been done on any ride before.

With this news and the Smiler opening at Alton Towers it will be an interesting 2013/14 season for Merlin Entertainment, they are even making a move on I Drive with the Orlando eye and Sea world centre planned.
http://www.thorpepark.com/rides/the-swarm.aspx
Last edited: Jan 22, 2013

Wow! I really wish I could get over there and ride those awesome roller coasters! :beadyeyes:

I think it will make for an awesome ride and I would totally ride it backwards! I think it's going to make a lot of people want to re-ride it to get a chance to do it each way, might cause some heavier wait times.

The going backwards thing has been done before, just sure about on a single car though. I know the Tower Of Terror (not the same as the Disney Ride) in Dreamworld Australia had is car reversed as part of a massive reverbishment of the ride. Then Six Flags MM copied the idea (the seem to copy Dreamworld a fair bit), with both their cars on Superman escape from Krypton, the only other ride of its type.
B

That sounds pretty cool! Being on front row was awesome so can imagine going backwards would be fun... Not sure I'd like everyone being able to see my scared face as going up the "climb"

Would love to ride this backwards haha

DLP did this with their Indy coaster in 2000. Only difference with that and this is all of the seats were configured to go backwards.

AquaDuck said:
DLP did this with their Indy coaster in 2000. Only difference with that and this is all of the seats were configured to go backwards.
Click to expand...

I have never known any other coaster to have dual seating arrangements.

AquaDuck said:
DLP did this with their Indy coaster in 2000. Only difference with that and this is all of the seats were configured to go backwards.
Click to expand...

I went on that. It was not a good time.

I think Six Flags Great America turning Batman the ride backwards will be way more intense and crazy...kind Of nervous to ride the thing!

OK so here are the first pics I have seen of The Swarm since it has had "upgrades" during closed season.

New backwards confuguration of the back 2 rows.

Up the lift hill 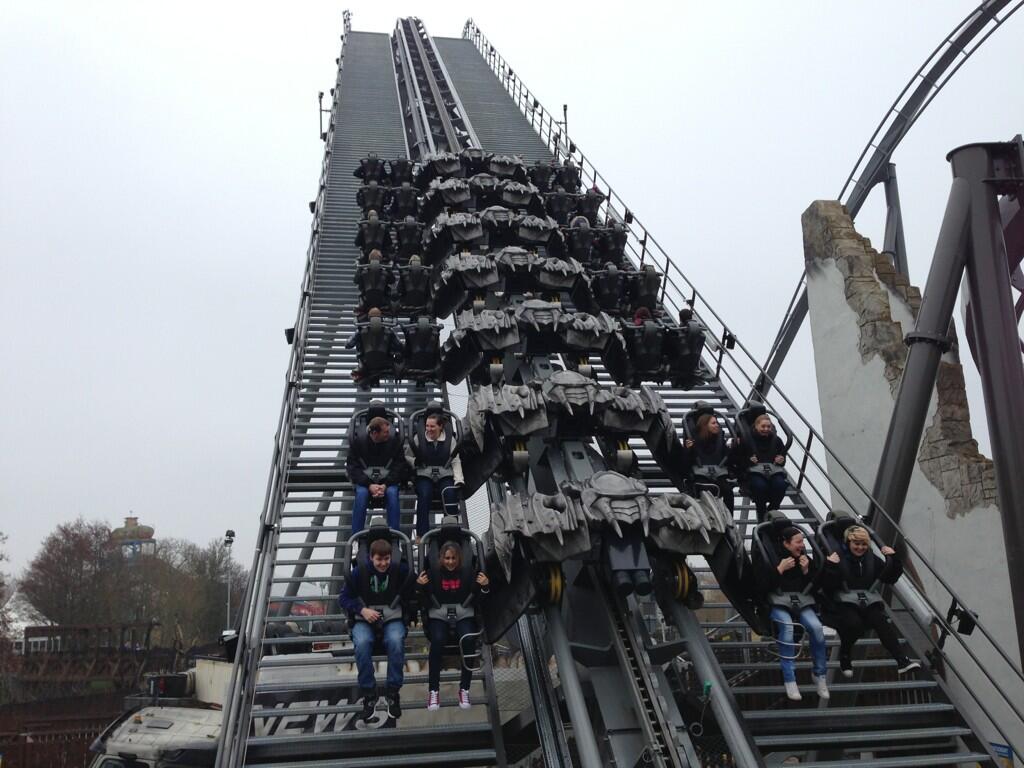 Some nice additions and I will see for myself in 3 weeks if they improve the ride. First hand report to follow.

First POV of the Swarm backwards.