Two year round haunts (not in SoCal): Trip Report

Since there's a lot of haunt discussion here, I thought it could be of interest to post about two year round haunts I recently visited. I'll keep them informative, but spoiler free.

The first was Ghostly Manor in Sandusky, Ohio, about 10 minutes away from Cedar Point. It's part of a roller rink, arcade, and indoor mini golf place, but it was recommended by a close friends who's done a LOT of haunts as one of his favorites.

We were a bit skeptical at first, as the parking lot is huge, but there were maybe only 8 cars parked and no one outside, making it look quite desolate, aside from the large dragon outside it's castle facade. However, we did notice many extra buildings in the back that are clearly for increased haunt attractions in the main season, so we did figure it was pretty serious. 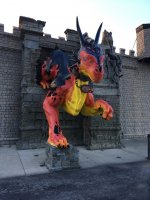 We went in after having paid $11. We were lead to a waiting area where we listened to an animatronic skeleton give us the safety speil, which was cheesey fun. We were also told to wait by the door until we heard a loud knock, and that it could be a while as there were other guests inside.

I will say there were live actors inside, perhaps about 3 of them, but they had a wide access to many parts of maze, so it feels like more. It's also clear they know the maze pretty well, and since you're more or less alone with them, they really have a lot of opportunity for scares, which is great fun. There is good decor and theming inside, on par with Knott's Scary Farm. Many animatronic scares, as well as live scares. Took us about 15 minutes to get through. While at the end of the day, it wasn't much different than KSF or Reign of Terror if you've done that one, it was nice to be able to access a haunt any time of year, and the quality was overall pretty good. I'd recommend it.

The second haunt we did was near Niagara Falls in an area known as Clifton Hill in Canada. It's possible to walk to Canada from the US side via the Rainbow Bridge, just bring your passport and expect a slow line (but it's probably easier than driving over and trying to park there). If you've never been to Clifton Hill before, it's not unlike International Drive in Orlando, or Pigeon Forge/Branson, in the sense there's a large density of tourist trap attractions. Only more so, because they are all very close to each other and compact, giving this very gaudy "Las Vegas for families/cheesey tourist attractions" vibe that really has to be seen to be believed.

They actually have a number of haunted attractions there, many with great facades. But we heard from the same friend, as well as this website that reviewed them all, that Nightmares Fear Factory was the best one by far. 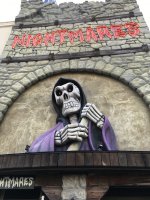 One way you can tell you're not in the United States anymore: if you ask them if you'll be touched inside, they only say, "You'll have to go in and find out." I don't think they'd get away with that here, haha.
You do get touched, many times, and maybe whispered in your ear.
They're also quite famous for having the "Chicken List": if things get too intense, you can yell "Nightmares" and get escorted out, but be added to the Chicken List count. Additionally, there is a key scare/photo moment that's pretty famous as well, and it's a hoot to go and look at the pics of all the terrified people. There's lots of YouTube vids of these pics, go see for yourself.

I obviously don't want to give it away, but I can say that this is a haunt you don't go in expecting any theming at all. About 95% of it is in pure darkness, and you are told to follow a series of small red lights as your guide. In this regard, it's quite similar in feel to The Exorcist maze, in that it's really the pure darkness that's most frightening.
There's a mix of flashes of light, animatronic scares, floor changes, and live actors to get into your head. Also, they occasionally block off passages or deliberately cut off the series of red lights to further disorient you.
I unfortunately didn't have any other time to do the others, but most seem to agree they're not as good. Although don't miss the facade of the large Frankenstein eating a burger because the haunt shares the same building as a Burger King. 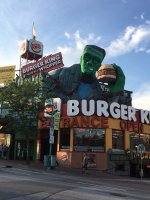 I know both of these haunts are not in the SoCal area, but both Cedar Point and Niagara Falls are pretty major tourist areas, so if you find yourself near them, take advantage of the year round haunts and get your fix in!
Reactions: Barbie06, Timberfellingrobot and Scott W.
You must log in or register to reply here.
Share:
Facebook Twitter Reddit Pinterest Tumblr WhatsApp Email Link
Top Bottom