DTH said:
As I was in the minority that thought Pandora's Box was one of the worst mazes we've ever had, this doesn't bode well for me lmao
Click to expand...

Every time I go to HHN in Hollywood, there's a maze where my knees buckle and I hit the floor and then Bambi walk my way out of the section. In 2019, that happened to me in Pandora on my 2nd or 3rd run through.
Reactions: Rideguy70

Beetlejuice is going to be soooo much fun. I know Florida had it last year but im excited to see it in person
Reactions: maroonmol, HydraGen2299 and Freak

I'd be shocked if the former was true considering there were rumors Uni wanted a full Halloween (18) and Halloween Kills maze and were denied either.
Reactions: Clive, HydraGen2299, Freak and 2 others

SailwiththeTide said:
Hopefully 2019 was the last year of the Jabbawockeez show.
Click to expand...

Jabbaz will be back in 2021. It's crazy popular. Not on these boards, but popular and a good people-eater.
Reactions: Rideguy70

I have to ask--how expensive does Jaaba usually cost? I would think that because it's a troupe that is primarily established at the MGM-Grand, alongside the effort of gathering the dancers and doing the blocking and choreographing, that it would be on a large scale budget.

Not a fan either, but I’ll take it over no show whatsoever. It is what it is.
H

I'm not gonna lie, i forgot jabbawockeez was even at the event last year.
I saw the show once in 2015 and every year since I've completely blanked out its existence.
Reactions: zto8411 and marip123
T

Hey everybody, so yesterday this was posted over on the Orlando board...

Tylerthecreator said:
Apparently they removed the shamrocks
Click to expand...

So, can anyone back this up? My thoughts on this are down below...


Tobias said:
Feels like this would be a good post for the Hollywood thread since HW is the only park with visual confirmation that they're getting one. An the shamrocks getting removed doesn't mean they lost it. Since back in 2019, they put up the façade for KKfOS and the tent was a dead giveaway, a little while later they covered it up. A whole façade is too big to take down and hide, unlike those shamrock signs which could be easy to remove and put back up.

However Ringwraith's post earlier does indicate things are a changin', so that could be the case.
Click to expand...

Tobias said:
Hey everybody, so yesterday this was posted over on the Orlando board...


So, can anyone back this up? My thoughts on this are down below...
Click to expand...

Well, there is always one solution to this problem... 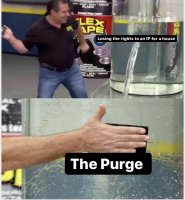 Jeez. There goes my most anticipated house.
Reactions: zto8411

There is video of it but that still doesn’t conform it’s officially gone
Reactions: Freak

I’m not going to worry about it until I physically see them take down the sets. Although if they do I can already see those clickbait titles from certain vloggers: