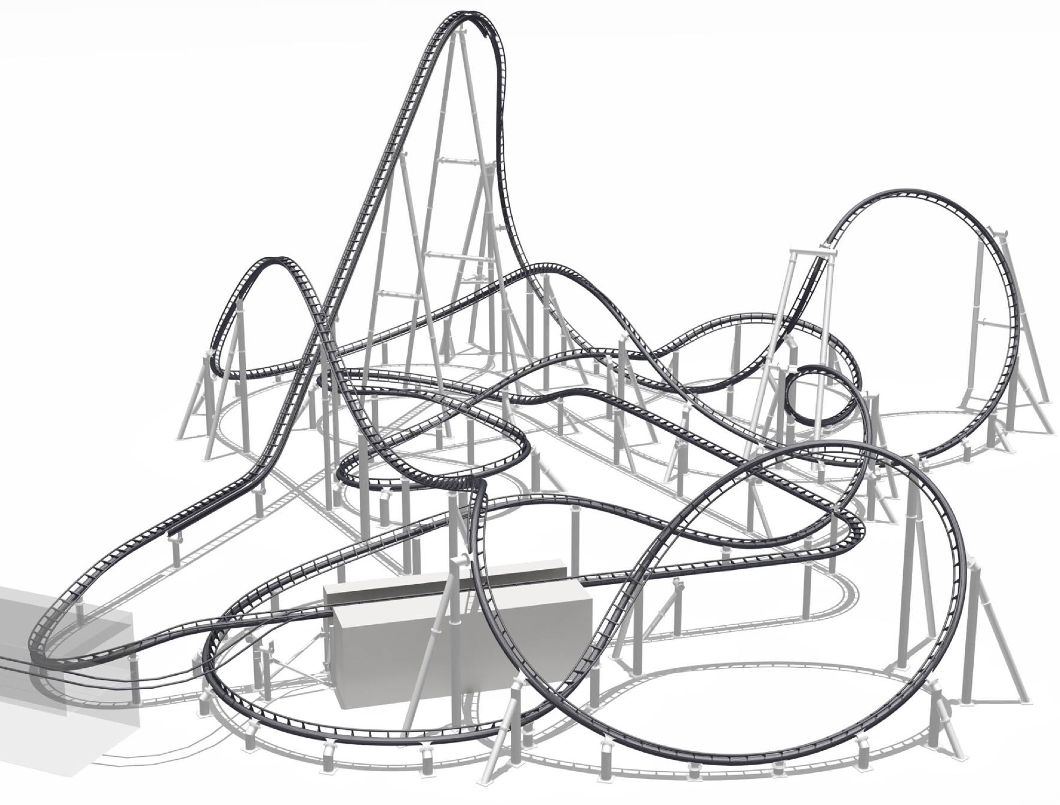 P@n!K_Sw1tC# said:
Something like this for Vortex's replacement please...

Absolutely. I would much prefer a lift hill with a nice drop into this style of layout.

SkiBum said:
I am hoping that maybe something like Copperhead Strike could be put in that location. It's prime real estate and also has some land countours to use effectively. Maybe in time for the 50th anniversary. Plus, that would help spread guests more effectively through the east side of Kings Island (along with Orion, of course). While I'm at it, I would take out Invertigo and the water ride (I still call it Congo River) and then install a nice little RMC in that area. That last part might be a stretch though as there may not be enough room. I'm talking an RMC in the neighborhood of 140' high and not one of the monsters that they are building (ex. Steel Vengeance, Iron Gwazi, etc.).
Click to expand...

I don't see Invertigo leaving any time soon. There's noting wrong with it. They put Stinger's train (from Dorney Park) on it this season and still have the other available for parts. It really takes up no room.I actually liked it, and much better than the sit-down Boomerang coaster's I've been on (including those with the new trains/restraints).
G

Whatever people might have thought of Vortex, it is sad to lose a historic Arrow coaster. It was also in a central location of the park, and that area will feel really empty once it is gone. They should have let Vortex run till they were ready to replace it. This just feels like a cost cutting movie. At least Magic Mountain still has Viper, which is the best of the Arrow Loopers.

I hope Kings Island never closes The Bat. I love Arrow Suspended Coasters, and it would really suck to lose one of the very last ones that still exist. Currently, there are only five left worldwide, and two of them are in the Ohio parks.

I found Invertigo to be way more of a headbanger than Vortex was. I am 6'4 though so my head is always far above the restraints on Arrow coasters.

Was not a fan of Vortex. It looks pretty, but isn't very fun to ride. Glad I got the credit.

Another Gerstlauer Dive Machine like Knott's Hangtime would be amazing in that spot.
Reactions: SkiBum
G

My pick for Vortex's replacement is a RMC T-Rex. The biggest thing that Kings Island lacks in terms of coasters is a RMC, so I would love for them to get a ground up RMC.

I could see a B&M floorless going into that spot.
Reactions: SukaVayne73

LintemuthStudios said:
I could see a B&M floorless going into that spot.
Click to expand...

I'd prefer this to the RMC T-Rex. I'd rather have something proven rather than something that could experience downtime. Plus, I'm not sure about the T-Rex capacity whereas B&M coasters are people eaters. I know that Intamin flies in the face of reliability but a megalite or blitz coaster would be nice.

Brake run is now installed on Orion and the BOC (Big Ol' Crane) is being assembled. According to park spokesman, the first hill should be completely constructed by the end of October.
Reactions: Joe

SkiBum said:
Brake run is now installed on Orion and the BOC (Big Ol' Crane) is being assembled. According to park spokesman, the first hill should be completely constructed by the end of October.
Click to expand...

This thing is going to open before West Coast Racers at SFMM. Smh
Reactions: Coolbfitz, Honor_Knight and Condog

And Orion is topped off. The first drop looks nice and steep.

Brief update for all those who aren't obsessed with the Kings Island webcams. It's honestly like a coaster peep show. Orion is almost fully assembled. They are down to the last curving hill with one more small (still taller than Racer's first hill) drop and then tying into the brake run. A mild winter has certainly helped with the construction. Good old Live Video Webcam | Kings Island. It's been very entertaining to watch this coaster come together but we'll enter the slightly more boring phase now as they tighten up everything and get the only slightly less necessary stuff installed (ex. Electronics, lift hill chain, brake stuff, etc...). They have announced that April 11th is opening day for this coaster. No word on a seasonpass holders preview but probably not (just a guess on my part).

Also, if you are offered a chance to ride Vortex one last time, I would decline. They have ripped out the station and track leading back to the batwing element (going backwards almost). I'm actually sad about the station as it was first used for The Bat, way on back in 1981. If they gave me a shot, I'd take a cutting torch to the quick turn following the second vertical loop and the first corkscrew to gain a measure of revenge for some hurting knees, ribs, and neck. So, again, any current ride on Vortex now will resemble some of the Roller Coaster Tycoon moments when we felt a little sadistic. Actually, I got more of a kick out of jacking the speed of the hydraulic space shot so that riders were launched way on up in the air before crashing. Sadly, it was kind of funny.
Reactions: Mad Dog, Magic-Man and Joe

And Orion is now a complete circuit.
Reactions: JPRA513 and Disneyhead

SkiBum said:
And Orion is now a complete circuit.
Click to expand...

That first drop is a thing of beauty. Love getting views of it on my drive home from work.

Dang, now just two months to wait until the park opens. However, I figure that I won't be riding Orion until May but still how awesome.

This thing hauls butt through its course
Reactions: Joe

This thing hauls butt through its course
Click to expand...

Someone brought up that it might be because they use different wheels for testing. I wouldn't expect this thing to be as fast on opening day.
Reactions: Disneyhead

LintemuthStudios said:
Someone brought up that it might be because they use different wheels for testing. I wouldn't expect this thing to be as fast on opening day.
Click to expand...