Not sure how this is in real life but this kinda looks like a waste of their money to make judging from the POV, looks very lifeless.

Remember back when Full Throttle opened there was no roof? Well so many people complained about the lack of shade SFMM spend the money on providing some covering for the station.

It’s very bizarre to me how there is absolutely no shade on the station. You would think they would put up a tent cover or something at least.
Reactions: Ron101, baconwhiskers and AlexanderMBush

Found this old photo of what the Full Throttle station used to look like when the park opened it with unfinished theming and landscaping. Even with Full Throttle, the storage track is uncovered. Emperor will have to consider adding a structure to both areas in the future.

Tidal Twister is back...

Remember those old plans for a jet ski coaster that were apparently scrapped? Well apparently it’s back on but modified. 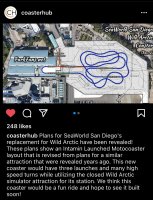 I'd love this too much...so wont happen but would love this

GAcoaster said:
Tidal Twister is back...

Heard Tidal Twister was down for refurb already lol.

Manta Pizza is also now open and is 15 bucks a slice...lol

Jerroddragon said:
They have a 24 hour sale for the Halloween event today if anyone is interested in going

Manta Pizza is also now open and is 15 bucks a slice...lol
Click to expand...

They've got to be kidding with those prices

ghostsarejerks said:
They've got to be kidding with those prices
Click to expand...

I was like whatever...thinking its on the all you can eat pass..but its not.

So yes, i sick joke

Rode emperor and it is by far the little theme of any ride...ever

Its fun but so short, no theming and loads kinda slow. No idea why people want more of these rides at the parks but I'd rather have like a dark ride or a ride I learn something on over another coaster that is short and not themed

The Dolphin show has been renamed and the stage has been redone but the show is still the old one
Turtle Reef is finally back open and while I heard they changed the theme on the aquarium. Nothing about it seems special but still some great views of the animals
Went to one of the free concerts they are doing in May and it was really good for a free show.
You must log in or register to reply here.
Share:
Facebook Twitter Reddit Pinterest Tumblr WhatsApp Email Link
Top Bottom