Will Any Wand Work at Harry Potter World?

I am taking my son to Harry Potter world at Hollywood near the end of the month and we heard that if you buy a wand at Ollivanders that they give you a map where you can stand at certain spots within Harry Potter World and little magical things would happen in front of us. I saw a video on YouTube and it looks rather fun.

My son has been once to Harry Potter world here at Hollywood and his mom (my wife) purchased him a wand at the theme park. At the time they didn’t know better and purchased a Narcissa Malfoy wand, but he still plays and uses it as if it was Harry’s or Ron’s. But anyways, my son states that he got it from a neighboring store and definitely NOT from Ollivanders shop and he believes that in order for the magical displays to work that not only does the wand need to be purchased from Universal, but that it needs to be purchased from Ollivanders.

I’m curious as to if these magical enchantments work with any Harry Potter wand, for example an hP wand purchased front Target or a Walmart, or if indeed only wands purchased from Universal Studios theme park would work.

Again, the wand was purchased at the theme park, but my son is certain definitely not from Ollivanders. I asked my wife but she can’t remember. She says she believes it was one of the stores on the way out of the park, maybe even the Universal Store at CityWalk.

IVE ATTACHED A PHOTO OF THE WAND (and Box it came in). Either way I’d love to know the technology used for this to work. Thank you! 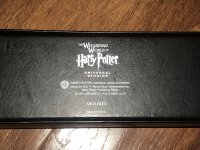 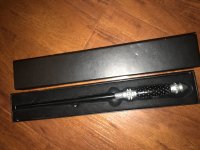 Negative. If it was the want with a bubble round plastic tip, it would. The color is similar to the end of an infrared remote bubble.

Yours looks flat, if I’m not mistaken.
B

Pro tip. Buy a wand on ebay before you go. Sell on ebay after you go if you have no intention of using it again. Minimal cost.

Thank you. I believe you guys are correct in mentioning the wands with the bulbs at the end are the one compatible with the wand magic at the park. I wonder if the wand ever needs recharging or how it works but either way I’d much rather just have him use his current wand than to buy a new one.
M

The wands don't require batteries or recharging. I believe the bead is reflective and the reflection gets picked up by the sensor, which triggers the spell effects to occur.
S

Also, if you end up buying an interactive wand, make sure to treat the pointer end with care. From experience, it can easily get scratched up and stop working. Especially if you carry it around outside that bulky case.