techmaniac16 said:
Just like how we know how to piss Megatron off, I wonder what we can do to piss this raptor off lol!
Click to expand...

Call her a boy!

Looks good! About time we had something like that at USH. Although the raptor suit does look a bit disproportionate and slightly goofy, especially compared to the fantastic costumes in Singapore and Japan. It's the massive buff legs that are throwing it off for me.

AlexShow said:
You had to say that, funny thing. In Orlando, one of the raptors gets pissed off by a sports team..I believe Baltimore but I could be wrong but the person would have to wear something to that team to be pissing off the raptor so..hey, it could be an Dodgers/angels dilemma for the raptors.
Click to expand...

So I guess I have to be careful when wearing a sports shirt.

(Hope that he is a LA Sports fan.)

Mikhail said:
So I guess I have to be careful when wearing a sports shirt.

I bet he is. He's just not a Lakers fan.

I think I can say that Orlando's version is far superior than this.
A

Keep in mind that it looks temporarily and we'll probably see a more permanent meet and greet in the future.

^ Yeah, heard from an employee that while the characters are permanent, the meet and greet area is not, and a much nicer one will come later, it is just not their priority at the moment.

At this point, they're doing whatever they can to occupy crowds while keeping them off of the main pathways. I haven't seen video yet, but this seems like a solid setup until they can figure out something more permanent.
Reactions: Aaron and BernardMesa

Saw the Encounter on the 4th.

And a little video http://vid1172.photobucket.com/albums/r578/certified_instigator/P7040053_zpsf8gklcmm.mp4
Reactions: BernardMesa, 12th Man and William
A

https://www.youtube.com/embed/tC_Rnf_VJnI?feature=oembed
Keeping in tradition with Orlando, Hollywood does have the raptors named..But not to Lucy and Ethel, the one in the video if i'm hearing this right; is Sulu. Not sure if theres another one for the naming..

Hmmmm so I see they are keeping with the 'prattkeeping' for the raptors.

I like the trainer, nice fun theme park humor... the raptor is still neat, but they definitely need to find a way to construct UOR's paddocked areas. I know they have the space.
Reactions: Alexshow. and Jonathan
A

A few new pieces have been added for the Raptor Encounter. 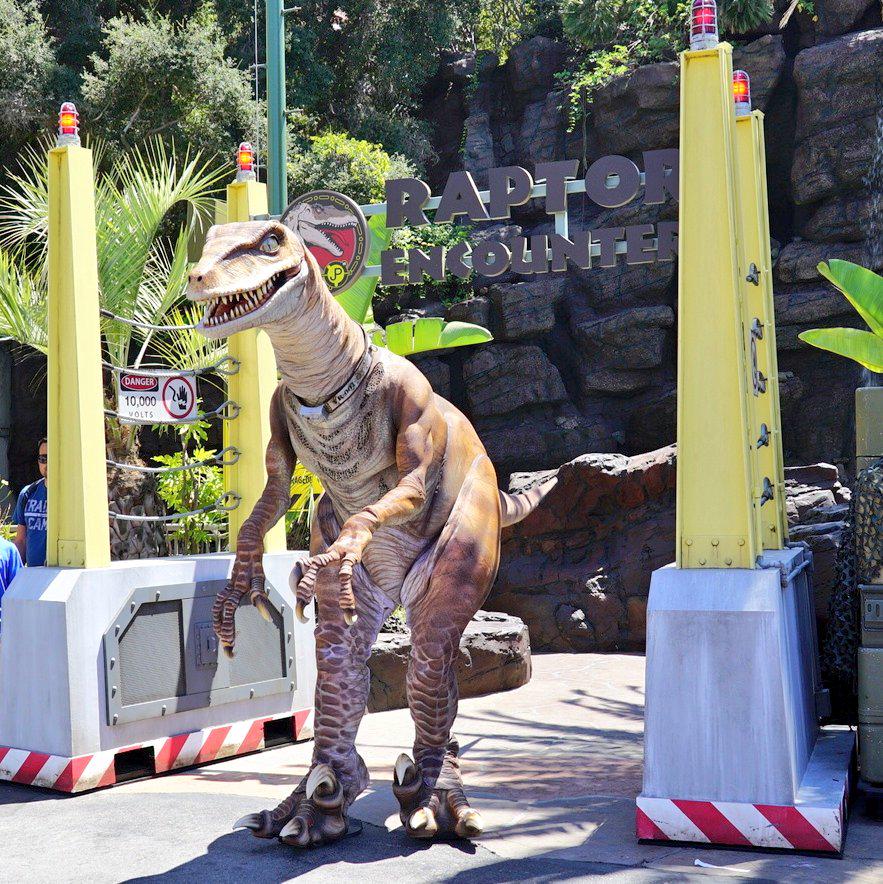 I'm glad the raptor is a free-roaming character unlike Orlando/Singapore. As for the quality of the raptor costume itself, I still think its completely awful & not proportioned properly. I would love to know who approved the raptor costume because it is not up to par with the Transformers. However, I'm just glad our raptor doesn't have the derpy expression that Orlando's does. I do joke though that our raptor was clearly given growth hormones back in the INGEN labs which explains its ginormous size.

I love that they're adding more scenic details to the photo-op area. Guess my friend was right about the crates by the snack stand afterall. This is just me being nitpicky, but I don't like the yellow-ish color for the electric fence props. It doesn't look right. Still yay!

In regards to the raptor costume... i'll just leave this here

Yeah, the disproportionate size and over all look of the costume and how it moves is very hokey & fake & cheesy. Why couldn't they have made a 100% identical copy to this?

https://www.youtube.com/embed/60jKp-yoaV4?feature=oembedSo many amazing Dino costumes available and we get this buffed up plastic thing.
Reactions: Wesker69

My complaint with the costume is that it looks like they frankenstein'd it out of existing dino costume pieces. The arms look like they're duck-taped on. The legs are huge. The neck is long & has bunched up fabric-skin. The list goes on... As for the size, I almost feel like they were creating a T-Rex costume & then randomly slapped a raptor head & claws to it

What really kills me about the quality though is that they created such an amazing raptor suit for the movie 22 years ago that is only seen on screen and can be enhanced digitally, but yet they couldn't apply that same level of quality for the theme park which has to be seen in person. It just doesn't make sense.

Due to the size of the raptor, I almost wish they would've just given us an I-Rex encounter instead lol (actually, can we have that!?)

Do we know if they're planning on doing something more permanent with the raptor photo-op?

The reason why I ask is, while I really do absolutely despise the color scheme of the electric fence(s), seriously the yellow looks awful and doesn't match what is seen in JPRA or the films... I do like that they're at least making the effort though. I'd just like to see them add some tropical/jungle plants/palm trees behind the "raptor encounter" sign so it looks a little better.... but I'm sure it will probably just make it worse like Brover pointed out above lol

Unless this is a temporary thing until we see SS demo happen behind Jurassic Café, Character Shop & Panda Express...

^ We will get a more permanent M&G in the future, it just isn't their priority at the moment.
Reactions: Wesker69 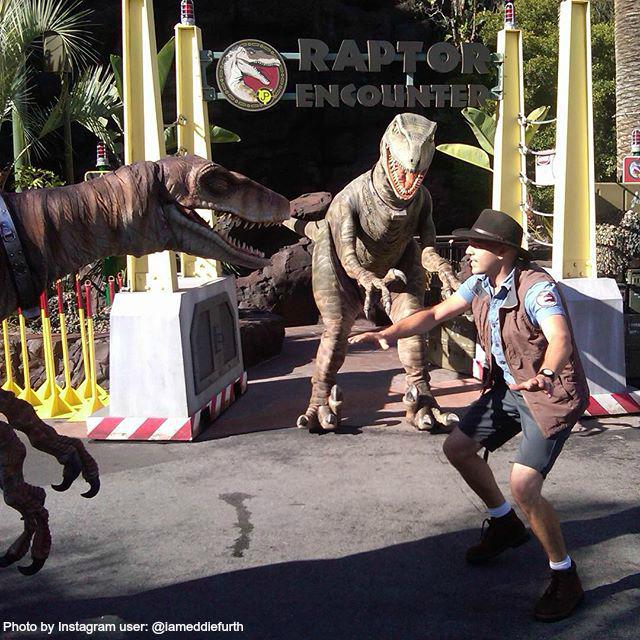 Woah, that is cool, I wonder why they did this?