I think the reliability is improving. The ride broke a new record today as it made it up to group 156!
Reactions: alias8703 and GadgetGuru

Freak said:
I think the reliability is improving. The ride broke a new record today as it made it up to group 156!
Click to expand...

and, in the meantime, DHS had a horrible weekend with continual breakdowns and evacuations.and.....About Half as many groups . DHS had numbers like that 6 weeks or so ago, but has regressed considerably ...Seems Disneyland is in better shape of the two.
Reactions: mainejeff

I've been avoiding this thread because I hadn't been on the ride yet, and was trying to stay as spoiler free as possible. Thanks to twitter (despite muting key words) and The Imagineering Story, a lot got spoiled anyway. But my experiences:

I went yesterday (Sunday of President's Day weekend) because it was the only day I had free to activate my new Flexpass. It was very, crowded. My husband, who had gone the day before and researched all the tips, was able to grab Group 15 the day before. But on that day, despite all the tips (shutting down all other apps, using data not Wifi, loging in just moments before... he even went as far as to check the data speed in the area we were standing to make sure it was strong), we still ended up with group 130. Pretty disappointed, we figured we probably weren't going to ride it at all, as our original plan was to leave the parks by about 2pm.

But we kept checking progress throughout the day, and by 10:30am or so, they were already up to the 50's. We suspect there was a breakdown around 11am or noon, as it stayed in the high 50's for about 90 minutes, and when we left the park at 1:30, they were only in the 60's. But after we went home to LA and took a huge nap, we noticed the groups were flying by again. At 3:30, they were up to Group 80. By 5:30, they were up to around 112, so we risked it and drove back down to the park. Literally seconds after going through the turnstyle, our group 130 got called at 6:35 and we did get to ride! As far as we could tell, they went up to group 156, which happened around 8:30pm or so, then stopped. So it seems the efficiency of the ride is definitely improving. We figure after that, since groups have a 2 hour window to return and the line is about 30-60 minutes, that takes them through the rest of the night.

Despite our trouble with this and our personal bad experience with the virtual queue, I'd still rather have this than a free for all stand-by line that takes 5-8 hours. Yeah, it's stressful and unfairly random, but at least you know right away and can plan the rest of your day accordingly without wasting half of your day standing in one line. And given that they're all gone in 1-2 minutes seems to hint we'll be stuck with this for at least through the summer, if not the rest of the year before anything changes.

On a side note, are there ever groups 1-9? Never seen anyone grab one of those. Seems like it starts with 11 at best. Also, if you did get a high numbered group that you can't/won't use, is there a way to transfer it to other people?

To me, this is definitely the best ride Disney has done in a long time. Pictures you see online don't do justice to the scale of the ride in person--it's immense and you really feel you are in the environment. While very impressive and enjoyable, it wasn't without it's flaws. My spoiler quibbles with the ride:

My husband also noted we seemed to be seeing the B mode of Kylo, so I can't compare that, but in his opinion, he liked the B mode better. He didn't find the A mode effects all that convincing or effective. I just have to take his word on that one.

Despite my quibbles, it's still a great ride, and one I'll look forward to going on as much as possible. Hopefully we'll get a better boarding group next time, haha.

I also find it amusing that Disney is borrowing the best techniques of itself and Universal rides/queues. Half the queue felt like a blend of Avatar and Hagrid in that it's a series of small, but not too small, rooms. And then a pre-show similar to the elevator in Gringott's (though certainly more intricate and detailed... but it is the same basic premise). An impressive waiting area similar to Smuggler's Run. Then an elevator ride structure similar to Transformers. Not complaining, just seeing the parallels.

But if you haven't done it, it's a great attraction. And when operating efficiently, the queue moves pretty fast. The fact they got to group 156 by 8:30pm is impressive, especially after initial reports.
Reactions: Mad Dog and JawsVictim

From what I understand, you see those empty ride vehicles because they are going to other “prison cells” to rescue more resistance personnel (the guests)
Reactions: Ryan, Joe and Freak

Ron101 said:
From what I understand, you see those empty ride vehicles because they are going to other “prison cells” to rescue more resistance personnel (the guests)
Click to expand...

They’re actually supposed to be random roaming droid transports. Beck tells the droid in our vehicle to “tell them it’s a prison transfer.” Yes, they’re vehicles that unloaded the last passengers and are backing into to the rooms to load new ones, but they’re worked into the story as roaming transports patrolling the area.
Reactions: Ron101
E

Anyone who rode this weekend have Kylo's Lightsaber not working?

Rode it twice this weekend both A and B side and neither had Kylo's lightsaber come through the ceiling.

This is definitely not good PR.
Reactions: Clive

Freak said:
They’re actually supposed to be random roaming droid transports. Beck tells the droid in our vehicle to “tell them it’s a prison transfer.” Yes, they’re vehicles that unloaded the last passengers and are backing into to the rooms to load new ones, but they’re worked into the story as roaming transports patrolling the area.
Click to expand...

I mean, my husband explained that to me later, but it certainly wasn't clear to me on first ride. It still barely makes sense to me from a story point of view. As a practical matter, sure. But when I first saw extra vehicles, I sort of thought it was supposed to be more like the ending moments of Symbolica at Elfting.


Erich Dunkel said:
Anyone who rode this weekend have Kylo's Lightsaber not working?

Rode it twice this weekend both A and B side and neither had Kylo's lightsaber come through the ceiling.
Click to expand...

My husband rode on Saturday and said it was working. We both rode it on Sunday, and it was not working. So it both seems to be true.

And for what it's worth, on Sunday, perhaps because the lines were all the way back to DCA, which was supposed to be having a Magic Morning, but their lines were blocked by the Disney lines, they opened the gates jut after 7am. Probably not typical, though.

Mad Dog said:
This is definitely not good PR.
Click to expand...

No, Jason is a Frommers Travel writer. I know he often gets comped and special access from Disney and the other parks, but he also goes in to parks as a "regular" person to get a better picture of what's happening for the everyday guest. 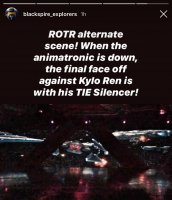 Not sure if this has been seen before, but when the Kylo AA isn’t working his tie fighter is projected on the screens to the right.

This is the version I saw when I rode it. I only found out later it was the B version.
Reactions: Ron101

It's been like this all week. That AA must be really giving them trouble.

Fallow said:
It's been like this all week. That AA must be really giving them trouble.
Click to expand...

The dark side of the Force was not happy about the Kylo Ren character, no doubt.

The movements that Kylo does for that scene seem a little intense for an animatronic and the fact it has to do it every 20 seconds
Reactions: Chris Galindo

A record boarding group was reached today for Rise at DL! Group 167!
Reactions: alias8703, HereWeGo, Clive and 2 others

When it has good days, that thing can really be a people eater. We went on Saturday, got group 31, and was called to board by 8:50 am (the park only opened at 8am).

Does anyone know how many people are in each boarding group? I'm just curious.
Reactions: Ron101

Don't know if this applies to SoCal but some WDW cast members claim each group holds anywhere from 100 - 150 people.
Reactions: Rideguy70
N