darkshadow237 said:
I thought it was scrapped due to size limitations.
Click to expand...

It’s a quick and cheap way to add something Mickey related during the 90th birthday celebration year.
Reactions: AlexanderMBush

So we finally have an opening date.

CM previews are on the evening of the 25th according to WDWMagic. That means it will open on the 26th. Gonna try to check it out next week.
Reactions: Clive

Keep your expectations low, then it might actually be enjoyable lol

Philharmagic is enjoyable on it's own. No tempered expectations needed.
Reactions: Andysol, Freak and Mad Dog

It's actually one of my fav attractions at the MK. The best part is when they expand the screen, like in T2, but unfortunately the DCA theater is too small. That said, it's still a very enjoyable experience. People should like it.
Reactions: Andysol, SkiBum and Clive

Mad Dog said:
It's actually one of my fav attractions at the MK. The best part is when they expand the screen, like in T2, but unfortunately the DCA theater is too small. That said, it's still a very enjoyable experience. People should like it.
Click to expand...

They also have the screens on the walls to work with. That can make up for the loss of the wrap-around.
Reactions: Mad Dog 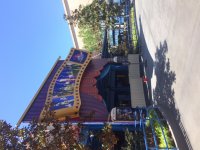 Sorry about the triple-post, but reviews are in from CM preview. Apparently they widened the screen a tad (but still considered a "watered-down" version) and they do use the side projections, but only as sweetners. Not an extension of the screen. The Donald Butt AA has been confirmed.

Sounds like it's exactly what I expected this to be. Still slightly watered down, but some effort put into making up for the lack of the wrap-around. Should be open in the morning.
Reactions: Rideguy70

Sounds better than the Paris version, small screen, no themeing to building and no Donald at the back
Reactions: Freak

So interestingly, they aren't done yet.

A frame for within the theater.

AlexanderMBush said:
A frame for within the theater.

I'm going to guess they're going to aim for finishing it by D23 in August, as it would make sense to show it off as one of the many things that Disney has done to continue investing for the original park.

What I'm excited, is the new entrance, and hopefully; it means they're also going to do some changes to the exterior queue.

I'm confused, where in there does it confirm the fake proscenium is coming? It just reiterates that we're getting a new entry marquee, which is sorely needed.

We could also use an actual Donald animatronic, but...
Reactions: Tobias
T

So that article didn't confirm the proscenium at all, it confirmed a new marquee which is different.
Prosceniums are the arches over the stage/screen of a theater, which is what WDW has.

A Marquee is what resides over the entry of the theater itself. Often times it's advertising what's playing, and that's what's being added.

As for PM itself, while they're clearly doing more then what DLP did for theirs with the projections on the side and a Donald statue (It's no AA.), I'm in the boat that would've preferred they'd actually put the time and money into reconverting the whole theater to have a proper Philarmagic 2.0 like what was originally planned way back. Trying to sweeten things with the projections on the side doesn't really work when you have it chopped up by thick vertical beams, plus the larger balconies flanking the sides of the main screen.
Reactions: Clive and AlexanderMBush

I would’ve preferred they use this as a chance to create a brand new film altogether that could then be rolled out to other parks. As much as I like PhilharMagic, it could use a bit of a refresh, mixing more current animation hits like Frozen, Tangled, Moana, with those in the show currently.

It’s been planned for awhile, they’re just too cheap to do it.
Reactions: Clive

Freak said:
Sorry about the triple-post, but reviews are in from CM preview.
Click to expand...

Mod Note: Posting back to back over various days with several, meaningful updates is acceptable.
Reactions: Freak and snayberry