Scarletwebslingr said:
You don't find them cuddley and endearing?
Click to expand...

...and tasty too! We have the Alligator Festival every year where I'm from. Gator burgers...gator on a stick...mmmmmm. :Yummy:

Wow nothing as good as Gator on A Stick.
B

Do they actually sell gator tail and gator-made food there?

BeachGurl said:
Do they actually sell gator tail and gator-made food there?

Yes at Pearl's Smoke House they have gator on the menu.

I haven't tried it yet at Gatorland. I used to get gator tail all the time at Sea World when they had the Al E Gator's restaurant.

The only gator product I've purchased and consumed from Gatorland so far was some jerky in the giftshop, it was pretty good but also had pork in it.

Poster X said:
Yes at Pearl's Smoke House they have gator on the menu.

I haven't tried it yet at Gatorland. I used to get gator tail all the time at Sea World when they had the Al E Gator's restaurant.

The only gator product I've purchased and consumed from Gatorland so far was some jerky in the giftshop, it was pretty good but also had pork in it.
Click to expand...

Gator-on-a-stick is fried and, basically tastes like chicken. I know LOTS of people say that about many different things...but fried gator really does taste like chicken. Alligator sausage is also pretty good.

BigAl_PT said:
...and tasty too! We have the Alligator Festival every year where I'm from. Gator burgers...gator on a stick...mmmmmm. :Yummy:
Click to expand...

I tried gator nuggets there in the past and yes, they actually did taste like chicken. ha ha

some random guy said:
gator burgers sounds interesting i would like to try that but i doubt applebees would put that on any menu
Click to expand...

Looks like Gatorland is jumping in on the Halloween fun.

From the Theme Park Rangers:

At a preview earlier this week, I wasn't sure to expect, and that was part of the thrill. The atmosphere out there is unfamiliar, especially in the dark, so something spooky could potentially come at you from any direction. We even viewed the ticket taker suspiciously.

The basics and backstory: Groups of about 25 people are toured through the Gatorland grounds under the auspices of solving why folks have gone missing. Along the way, you encounter aliens, a startling number of zombies, a couple of rednecks (aka Bubba and Cooter), real alligators in the swamp and a few fun surprises that I won't spoil here (and, boy, is it tempting).
Click to expand...

You can find more about it at www.gatorland.com

BriMan said:
Looks like Gatorland is jumping in on the Halloween fun.

From the Theme Park Rangers:

You can find more about it at www.gatorland.com
Click to expand...

I wanna meet Bubba and Cooter

One of the funnier Jaws skippers is one of the people running this it would seem, so I'm sure it'll be fun.

I really would like to go check this out, don't think it's in the works for this year though.

I wanna meet Bubba and Cooter
Click to expand...

So we met Bubba & Cooter.

I thought it was fun for what it was and you can't complain about the price either. The creepiest part was actually before the tour happened. While you wait for your group to be called, you can do a variety of things. One of those activities is a bog walk in pitch black to read stories of Halloween. I'm sure I heard a gator or two close by.

I suggest the locals to check it out as it's a different experience then HHN, and again...it's $10.

I'll have a full review on Wednesday, when the site opens. :thumbs:

Anyone heard if they are going to do the halloween event this year? The website was down currently.

More news on the zipline has been released. From the Orlando Sentinel:

Gatorland guests will be zipping over jumping crocodiles, the alligator breeding marsh and through the park’s bird rookery by June, park officials said Thursday.

Details of the Screamin’ Gator Zip Line, announced during groundbreaking for the attraction, create some wide-eyed expressions.

The project has been 15 months in the making, a period that included a tour of other zip lines and getting proper permits for the zip line’s tower, which top out at 75 feet. (The current observation tower at Gatorland is 48 feet.)

What Gatorland officials noticed while visiting other zips was a lack of animals, something in ample supply at the South Orange Blossom Trail park, which opened in 1949.

“That’s probably one of the most diverse animal habitats you’re going to see on any zip line in the United States — I would suggest anywhere outside of Costa Rica, as far as the animal experience on the zip ride,” McHugh said.

“The crocodiles can jump — they can’t jump 40 feet,” McHugh said.

The third zip goes over the giant Nile crocodiles and near the saltwater crocodiles.

The fourth leg, almost 600 feet long, zips through pine trees and comes out across the south end of the breeding marsh and ends near the gator wrestling arena.

Next will be a swinging bridge over the main walkway of the park. And the final stretch will be a dual zip line where folks can race. It will be parallel to the parking lot and visible from Orange Blossom Trail.

“You want something that people driving by can see,” McHugh said.

It’s the first ride ever at Gatorland, not counting the train that skirts the property.

“This is our sweet spot. This zip line is Gatorland. It’s quiet, it’s eco-friendly, it takes you through some of our most beautiful ecological assets out there. We really think we’ve hit a home run,” McHugh said.

Pricing has not been settled yet, he said, but he expects the zip experience to be between $60 and $70, and that would include admission to the rest of the park. Regular admission will not change. Maximum capacity for the zip line will be about 200 people a day, McHugh said.

Cost of the project is $1.5 million. Gatorland expects to create 15-20 full-time and part-time jobs via the zip line.

McHugh said the park had done “very, very well” during the recession.

“We’re just not going to take our foot off the pedal,” McHugh said. “One of the areas that we see that we’re weak is with the teenage demographic. So one way to add a little excitment to our park is to put a zip line in there and let them zip over alligators and crocodiles.”

Zip lines have been established at other Central Florida attractions, including Forever Florida near St. Cloud and the Central Florida Zoo in Sanford.
Click to expand...

You can now reserve your spot on the Screamin' Gator Zip Line.

News on the ZipLine, which opens June 16th.

There are a few restrictions for riders. Children must be at 37 inches tall and weight at least 60 pounds. Adults must weigh less than 275 pounds and may be asked to step on the scale before being cleared to ride.


When the Screamin' Gator Zip Line officially opens it will cost $69.99 per person which will include admission to the park.
Click to expand...

I don't know if anyone noticed, but Gatorland will be doing a Halloween event this year, “Gators, Ghosts and Goblins”, select dates starting Oct. 19.

It's nice to see a traditional family attraction doing something new like this. Should be good, family fun!
Reactions: OrlLover, Coasted and Journey_On 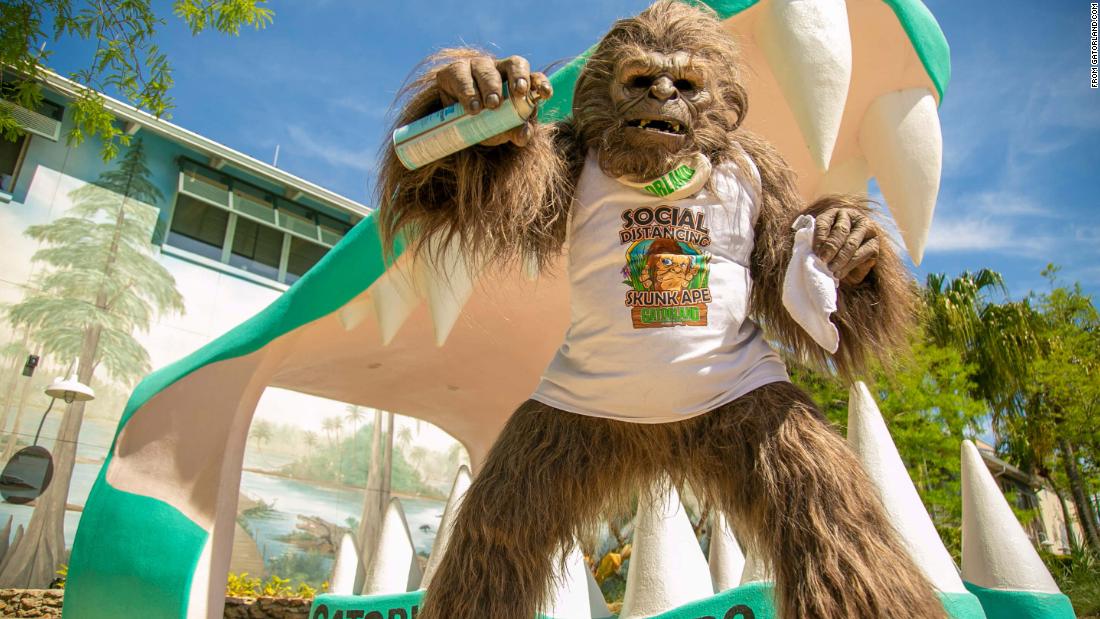 Gatorland has a social distancing scheme that is so very Florida

Gatorland park has come up with a social distancing scheme that's so very Florida. Meet the Skunk Ape, a mascot that will help visitors stay apart while have kooky fun.