Does any one have the layout of the old ET attraction?
Last edited by a moderator: Feb 17, 2015

I haven't seen one, but I'll look around some of the Florida sites and see if I can find something at least for reference.

Producer and Director for the live publicity stunt of E.T. the Extra Terrestrial arriving at his new home at Universal Studios Hollywood. The hook for the press was E.T. arriving via space ship flying over the San Fernando Valley. Once landed at his new home, E.T. interacted with children from the audience prior to the preview of the new ride. A gala celebrity party was held to celebrate the new ride hosted by Steven Spielberg.

I'm sorry... but this looks like the creepiest opening ceremony ever.

I wonder if that is the inflatable UFO they used in Spectra-Blast in 1994.

Does anyone have the actual "E.T. adventure" poster from hollywood?
C

I just realized it's already been 12 damn years already that E.T. closed down on the lower lot . Anybody got any pictures of the ride ????? or posters ????
Reactions: Maurice2029

Making me feel old. I remember when the ride was still operating...memories right there.
C

sickle_claw said:
Making me feel old. I remember when the ride was still operating...memories right there.
Click to expand...

YUP!Those were the good old days (:

I wish I could go back in time and

https://www.youtube.com/embed/5HcZAsiliuA?feature=oembed
Its so weird seeing this view without JPRA! I hope E.T. says your name as you exit the parking structure. If not, it's a missed opportunity.
Reactions: Freak, Allen The Actor, k_peek_2000 and 3 others

William said:
I hope E.T. says your name as you exit the parking structure. If not, it's a missed opportunity.
Click to expand...

I hate to bump this thread, but I have a Layout of the entire attraction I found while watching an old travel channel documentary about Universal Studios Japan. I’ll link the documentary down below. I also decided to lay E.T.’s layout over the Revenge of the Mummy’s layout for fun. I’m not too sure how accurate it is, but I gave it my best shot. Lastly, keep in mind that every single E.T. Adventure had identical layouts, while the difference in each incarnation was in the set pieces and animatronic figures. Therefore, this layout also applies to Florida, and the former Hollywood incarnation. 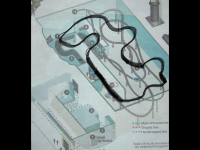 Look how fluid the animatronics appear in this video. A far cry from the creaky messes the last standing Orlando iterations have become.
Reactions: Cup_Of_Coffee, TheGentTrent, Mad Dog and 3 others

Clive said:
Look how fluid the animatronics appear in this video. A far cry from the creaky messes the last standing Orlando iterations have become.
Click to expand...