Jwhee said:
Another, this time shot from behind MIB. "Universal can't do big fireworks" pssh

That's their New Years Eve fireworks show which they probably get special permission to put on since it's only once a year. Speaking of which, is the reason that Universal won't do large fireworks shows actually because of the neighbours or is that just a rumour?
Last edited: Dec 9, 2019

This may be an old thread, but something that really clicks me when I searched online. I found out that back in 1991, MCA was one of the original bidders for Hanna Barbera, before Ted Turner beat out others in acquiring the animation company. Turner stated he wanted Hanna Barbera so he could have the opportunity to launch a children's programming that we know today is Cartoon Network. But what if MCA actually succeeded in acquiring Hanna Barbera instead? After all, Universal Studios was involved in the Jetsons movie, the Hanna Barbera ride, and the two Flintstone movies. Would Universal have its own CN in the 1990s instead of two decades later?
Reactions: Gillman

Didn’t know where to put this. On the second floor of Citywalk outside the Moe’s/Panda Express/Burger King. Pretty interesting to see a memento from the Jaws ride in 2020. Sorry if this is already well known. 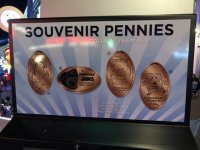 I'm making a point of collecting pennies on my trip in a couple weeks, and I'll definitely be getting that one!
Reactions: redy2468

Sure to please some people.


From The Dis Universal Edition someone *finally* uploaded a full version of the Murder, She Wrote attraction.
Reactions: Frankyg123 and belloq87

Nice to see a more complete version of Murder, She Wrote. I only saw the show once in 1993, but the dubbing/ADR section always stayed with me.
Reactions: Brian G.

I think there is a reason we haven't seen any 2020 merch yet.

Probably the slowdown of Chinese manufacturing.

Long beach is almost shut down and has seen 50% drop in ships since this started. Will take some time for the merch to be here for sure
Reactions: Mad Dog

They usually roll out the next "year" of merch at the end of the prior year. Corona panic wasn't an issue yet.
Reactions: Joe

My theory is they're just not going to acknowledge the anniversary in any meaningful way because that's how Universal (unfortunately) does things.

My theory is they're just not going to acknowledge the anniversary in any meaningful way because that's how Universal (unfortunately) does things.
Click to expand...

Suggestion is they didn’t roll out 2020 in late Dec because they’ll do a larger 30th push around that time.
Reactions: Coolbfitz, Brian G. and belloq87

I wonder if they have any plans in place for their 30th at all.

Scott W. said:
I wonder if they have any plans in place for their 30th at all.
Click to expand...

For once, Universal's M.O. of barely celebrating anniversaries, is advantageous.
Reactions: Coolbfitz

Scott W. said:
I wonder if they have any plans in place for their 30th at all.
Click to expand...

Wouldn't be surprised to see some signage like the 25th either, but only know of a merch line.
Reactions: Coolbfitz, belloq87 and Joe

Wouldn't be surprised to see some signage like the 25th either, but only know of a merch line.
Click to expand...

Which is why we didn't get any 2020 Universal Orlando stuff. But then *waves arms* this happened.

No doubt from a business perspective, they've looked at the data and have concluded putting a lot of money into arbitrary anniversaries isn't worth the cost/benefit. It doesn't motivate enough people to book a vacation to justify the cost.

On the other hand, Disney knows they can get 2000 fans to show up at a theme park for bathroom anniversaries. It's just a different business model, with a different base.

I think there's a fanbase ready to spend money on retro USF merch if Universal ever put any out.

This has really been bugging me for a while...Was there a Casper walk-thru attraction where you got to visit sets and props from the film? I've been looking for pictures and videos of it online, but there seems to be little evidence that it existed (There are pics and vids of a similar attraction at USH). I swear I have vague memories of it, but I'm beginning to think I might just be imagining it. Does any one remember what I'm talking about? Anyone have pics or vids of it? Thanks!
Reactions: thelondonwerecat, Clive and belloq87
You must log in or register to reply here.
Share:
Facebook Twitter Reddit Pinterest Tumblr WhatsApp Email Link
Top Bottom