All the technical effects are amazing and impressive. The drones are great, and there's an incredible "ripple" effect.

My only complaint is that there's zero story. Just a collection of random cool scenes that have a dark side to them. There's very little narration to connect any of the scenes or even tell you what you're looking at. Someone who doesn't know the Harry Potter films is going to have no idea what's going on for most of this show.

They did have a lot of surveys going on after the show, so it'll be interesting to see if anything changes. I kinda doubt it, but at least they're asking. The survey was quite detailed (can't give away what it asked, although it was nothing surprising).
Reactions: HPFred and tacalert

Incredible finale. Goosebumps...it was so fun to be a part of that initial crowd.
Reactions: BernardMesa and SuperSloo
F

Maybe I just was making assumptions, but are they not doing the dark mark in the sky with drones?

fryoj said:
Maybe I just was making assumptions, but are they not doing the dark mark in the sky with drones?
Click to expand...

The drones form the Patronus charm. Dark Mark is projected on the castle.
Reactions: HPFred

SuperSloo said:
The drones form the Patronus charm. Dark Mark is projected on the castle.
Click to expand...

Bummer. The dark mark in the sky would be pretty bad ass.
Reactions: Evan

So I watched all 5 showtimes tonight... the first two from Three Broomsticks patio while I ate. Then the last three showtimes from infront of FJ...

the new Dark Arts show is really great! For anyone whining about a lack of "story", its not necessary. Hell, the previous two Potter light shows don't have a story either. However, all 3 light shows NEED to add A LOT more Slytherin

The fog & fire effects were outstanding! Also, very unexpected! The drone tech was impressive, but I would've rather seen THIS...

instead of the deer. The deer was very cool, but from a technical stand-point, it was probably A LOT easier to program than this would've been..

The intro narration was decent, but the outro narration & deer patronous was too uplifting for a more horror-based light show. Overall this was a great new addition to the park. Could be a tad better, but still very enjoyable..
Now excuse me, I have almost 200 pics to go through

How loud are the drones when watching the show from in-park?
Reactions: HPFred and Teebin

AlexanderMBush said:
I think I more confused the fire with pyro, which may of been my bad.

Meanwhile, from the first public showing..

Looks like Universal has a huge crowd pleaser on its hands. I wonder if they’ll add the drones to the other existing shows in the future.
Reactions: HPFred

Has anyone found a really good quality video of the show with all effects working in its entirety yet?

Andysol said:
Has anyone found a really good quality video of the show with all effects working in its entirety yet?
Click to expand...

It really too bad there isn't a big fireworks burst right at the end... Something with the colors of all the houses.
Reactions: Teebin

Yeah, I like this, especially seeing the full version. And , for sure, the experience of watching this live, will be way above a You Tube version. The rolling fog is a really nice effect. It seems to add a lot to the mood. I'm never crazy about too much narration for shows. this is enough narration for my tastes. More would just be overkill and distract from the sensory experience. I really like the WOW moment with the deer patronus drone effect at the end. It sent a shiver up my spine. When I saw the video from Thursday, without the patronus drone, I thought it needed fireworks for the last scene. I've now changed my mind. The deer patronus drone scene was just right, and perfect for the moment. Fireworks after that would have subtracted from the drone WOW moment. They would have been too much. With this full scene being almost 10 minutes long, this answers the biggest issue with the previous show, namely it being a short 4 minutes. My only criticism, and it's just a mild one, is that the show could have used a short fireworks burst highlight somewhere near the middle of the show. But overall, Universal just gets better and better the more shows they create. And Hogwart's Castle is just about the most perfect setting for a projection show (except for the shortage of spectator space). Can't wait to see it and give a true, on the scene, review. You can't get the real 'experience' just watching a video. You actually have to be there to feel the show.
Reactions: HPFred

Nick said:
How loud are the drones when watching the show from in-park?
Click to expand...

I was wondering about how this would be as well... but when watching the show, you can't hear the drones at all. I'd imagine if you could hear them, it may be from the Studio Tour area, as the effect seems to be semi-directly overhead that area. But I didn't try it.

I also wondered what a sight this must be for random cars driving on the freeway.

ItsAtrap said:
It really too bad there isn't a big fireworks burst right at the end... Something with the colors of all the houses.
Click to expand...

Personally, I don't think it'd be needed. Besides, I imagine there's a lot of practical problems of shooting off fireworks with 250 drones nearby.

the new Dark Arts show is really great! For anyone whining about a lack of "story", its not necessary. Hell, the previous two Potter light shows don't have a story either.
Click to expand...

Also, if you're not very steeped in Harry Potter lore, there's a good chance you'll have no idea what you're looking at. Even after 4 viewings, there were a few scenes where I still thinking, "WTF is that, anyway?"

But I will admit I'm likely splitting hairs. From an entertainment point of view (and technical!), it's amazing. Just think better connections between scenes would push it over the edge even more.

And after seeing this, I'm very anxious to see how drone technology in shows will improve over the years. I can only imagine how this will develop in even more incredible ways.
Reactions: HPFred and Nick

Nick said:
How loud are the drones when watching the show from in-park?
Click to expand...

Honestly, I didn't even notice any noise from them. The audio & general theme park noise overpowered it. The area is pretty well supplied with speakers..

A plane passed by during the final showtime towards the end, so I got to witness the drones make their entrance with red flashing light. Once the plane passed, the drones went back to blue light. So at least we know the safety protocols work lol


ItsAtrap said:
It really too bad there isn't a big fireworks burst right at the end... Something with the colors of all the houses.
Click to expand...

A show like this doesn't require big fireworks. I love excessive pyro & all, but fireworks aren't needed... Now a more dramatic lighting effect at the end (like Nighttime Lights & Magic of Christmas), yea.. that is something i'd prefer after the Drone Deer. Because I heard MANY guests after each viewing say:

So a more definitive finale lighting package post-deer would be something good to add.
Reactions: HPFred, Mad Dog, Rideguy70 and 1 other person 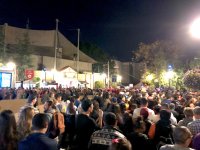 I thought the show was great. My only complaint was that the run time is still too short.

I was impressed at the crowd management that night. The first showing was filled up so they held people at the hogsmeade archway and had the line occupy the Dreamworks theatre queue. Guests who wanted to ride DWT would enter through the express entrance on the right and those who wanted to enter Hogsmeade would enter on the left stand by line for DWT. Guests exiting the show were directed down Minion Way and went around Universal Plaza. It sounds like a mess but it’s necessary for the layout of this park.

In the photo is the mayhem of guests entering the show and leaving!

Oh yea, I'd also like the point out that Universal actually added an additional showtime around 8:10 due to the huge crowds. Originally, the first showtime was at 8:30.. I definitely applaud Universal when they add showtimes. I've seen it done for both Nighttime Lights & Magic of Christmas.
Reactions: HPFred

On Thursday night when it was too windy to fly the drones the crowd was very confused as to when the show was over. On the Friday and Saturday they flew them there was no question that the Stag was the grand finale and the show ended.
Reactions: HPFred, Mad Dog and AlexanderMBush

The show was incredible. The choice for the drones as the Patronus was the right choice. The crowd ate it up. I think this show is the epitome of the projection map show. To go any further would overdo the quality of the show. No fireworks are needed when the drones are present (not to mention that you cannot have both launch from the FJ building). The amazement of the audience was exciting to see.
Reactions: Sydney, Fallow, AlexanderMBush and 1 other person
You must log in or register to reply here.
Share:
Facebook Twitter Reddit Pinterest Tumblr WhatsApp Email Link
Top Bottom