Joe said:
Pardon the ignorance, which between 108S and 79B is Old Parade and New Parade?
Click to expand...

Guessing that the SS queues will work like this:

SS23-south: Queue in music courtyard, through west side of SS22, exit in courtyard by Fallon bathrooms.
SS23-north: Queue in Fallon, where SS24-east normally is, exit see above.
SS24-east: Queue where ST was last year, but goes to east side of 24 instead of into 25, exit same as last year.
SS24-west: Same as last year on both queue and exit.

I agree. iZombie appears to be the stepping stone. We just haven’t found the next part of it, yet.

I though I had something with my Silence guess. iZombie’s biggest difference between most zombie shows/movies is that fact that the zombies actually crave and eat human brains.
M

The Haunting series would be amazing. Was bummed it didn’t come in 29, so I wonder if it were to come whether it would be Hill House + Bly Manor or just Hill House.

Damn, was hoping it was The Thing or Scream, BUT this is pretty awesome too.

randomguesser said:
The Haunting series would be amazing. Was bummed it didn’t come in 29, so I wonder if it were to come whether it would be Hill House + Bly Manor or just Hill House.
Click to expand...

Not surprising--WD and ST had two year gaps between premiering and showing up at the event.

Anyway, if this is true, I am very, VERY pleased. HoHH was a truly dark, moody, gothic, subtle, grand, beautiful, and incredibly tragic story. An IP truly worthy of the 30th.

DannyPowers said:
You could say that for every house though. That's why they put creative people in charge of designing them.

Yeti could easily have been "It's just a Yeti jumping out over and over again". It's the design of the scares that make the houses unique.
Click to expand...

I can buy that.

No rest for the weary.

Legacy said:
And there you go.
Click to expand...

I will say, this was my prediction back on Feb 23 when we were discussing what would be the first house announced: Halloween Horror Nights 30 Speculation Thread

Anyway, here is the updated list (added in my first 4 guesses already). I gave a *** to people who "nailed it" on the exact breakdown. I also gave @Taylor13 an assist for the last clue because it was so difficult. I don't want to get into a thing where everyone gets an assist for getting a portion of the clue - this was a one-off as we were absolutely stuck for days and had made zero progress on it. So, here's the list. 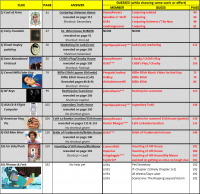 I can see it now in the future, The Horrors Of Netflix lol
Reactions: Grabnar and Living Dead Dude
R

Pedro Navarro said:
I can see it now in the future, The Horrors Of Netflix lol
Click to expand...

I can’t wait to see Black Mirror as a house after Hill House gets the ST treatment
Reactions: Grabnar and Pedro Navarro

Now, I BELIEVE this exact clip was taken from THIS website (not 100% sure though): Tri-State Gazette/Issue 43

So, there's some basic info for you fine folks to run with.

MY FIRST ATTEMPTS AT A GUESSES
* Obviously we have no letter (H, Z, etc.) or shortcut. So we're working from a blank slate at this point.
* Given that, I'm going to go with the "most likely" direction, which is an "H" with a date and/or location clue.

* This issue was released on May 1, 2011.
* A huge event took place on that date - Osama Bin Laden was killed.
* Zero Dark Thirty was a movie about the killing of Bin Laden.
* Jason Clarke, Jessica Chastain, and Harold Perrineau all starred in Zero Dark Thirty.


***** EDIT: ONE MORE GUESS BEFORE I GO TO BED
* Phineas and Ferb clue
* Phineas and Ferb had a "horror" episode called "Terrifying Tri-State Trilogy Of Terror"
* "Terrifying Tri-State Trilogy Of Terror" was released on October 5, 2013
* A movie called "Scarecrow" was also released on October 5, 2013
* ANSWER: Scarecrow: The Reaping Sequel/Return
Last edited: Mar 12, 2020
Reactions: TheCodeMan95 and thelondonwerecat